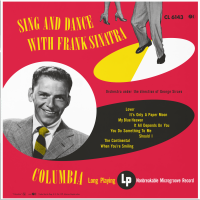 Sing and Dance with Frank Sinatra is without question a recording achievement of importance and historical magnitude. Producers Charles L. Granata and Andreas Meyer have delivered an experience that sources and reconstitutes important Sinatra mid-20th Century material. It will fascinate Sinatraphiles and enlighten those interested in "The Voice's" artistic development from crooner to swing icon.

Included in the album are eight Great American Songbook classics that Sinatra recorded for Columbia Records circa 1950 with swinging big bands. Those tracks are augmented by a series of bonus tracks, some extremely rare—"Farewell, Farewell to Love," "Deep Night" (with Harry James), alternate takes, and fascinating in-studio stops, starts, and commentary. The overall effort presents Sinatra at a pivotal professional (and, as the liners detail, personal) point in his career. Here he's evolving as an artist right before our ears. From the opener, a fiercely up-tempo rendition of "Lover," and the ensuing "It's Only a Paper Moon," Sinatra is on a path that would morph him into the classic swinging star of later years. Savvy listeners will still hear remnants of Sinatra-as-crooner possessing a faster "Tommy Dorsey" vibrato on four-beat tracks such as "My Blue Heaven," "It All Depends on You" and "You Do Something to Me."

The jazz-infused big band arrangements of George Siravo (later affiliated with Doris Day, et al) superbly frame and energize Sinatra. They played to his impeccable phrasing, rhythmic genius, jazz feel, and lyric interpretation ("Should I," "The Continental," "When You're Smiling"). This interplay portends future swinging material where Nelson Riddle, Quincy Jones, Billy May and others would paint Sinatra as a swinging "member-of-the-band." No ballads here, the iconic balladic material of the Capitol Records "lamp post" period was still to be recorded.

The production values are spectacular. The sourcing, re-mastering and re-mixing process was a herculean accomplishment. The extended liner notes from Granata, a Sinatra author (Sessions with Sinatra, Chicago Review Press, 1999), archivist, radio host and expert, will appeal to those with a historical and/or audio engineering/technological interest.

While Sing and Dance with Frank Sinatra offers significant historical value, the performances are as monumentally enjoyable as they are valuable. Displaying vocal and technical perfection, it is an exciting listening experience and certainly one of the finest releases of 2020.

Lover, It's Only a Paper Moon, My Blue Heaven, It All Depends on You, You Do Something to Me, Should I, The Continental, When You're Smiling (the Whole World Smiles with You); Bonus tracks: Farewell, Farewell (Original Master Tape), Deep Night (Original Master Tape), It's Onl a Paper Moon (Alternate Take), You Do Something to Me (orchestra take, false starts - alternate vocal take, American Beauty Rose (alternate vocal take), It All Depends on You (Session + test take).