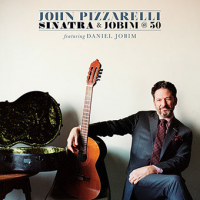 The year 1967...the "Summer of Love," the Monterey Pop Festival, the release of Sgt. Pepper's Lonely-Hearts Club Band, Their Satanic Majesties Request, and Bob Dylan's Greatest Hits. At the other end of the popular music spectrum, the beautifully square end, was the release of Francis Albert Sinatra & Antonio Carlos Jobim (Reprise), the recording that, with the Stan Getz/Joao Gilberto recordings of the period would justify and substantiate Bossa Nova in the American Musical Lexicon. Guitarist and singer John Pizzarelli takes full advantage of the height of his consider powers, to consider this recording as it celebrates its 50th birthday.

Pizzarelli's recording Sinatra & Jobim @ 50 is a quiet, breezy affair of lilting Brazilian rhythms and melodies played by a crack team of musicians. While Pizzarelli faithfully recreates much of the original recording, he wisely avoids "The Girl from Ipamema" and adds "Antonio's Song" and "Canto Casual." His singing and guitar playing are of the level we have come to expect of Pizzarelli, who has matured fully into this role of keeper of the flame for this flavor of jazz music. Of note are pianist Helio Alves ("The Frank Sinatra of the tenor saxophone"). These two men provide the quiet heat and humidity that lay below Pizzarelli's superb Portuguese. The combination of "Meditation" with "Quiet Night of Quiet Stars" is inspired and perfectly functional as is the pairing of "If You Never Come to Me" and "Changing Partners." Yes, 1967 was a very good year.

Baubles, Bangles, and Beads; Agua de Beber; Meditation/Quiet Nights of Quiet Stars; Dindi; I Concentrate on You; Antonio’s Song; Two Kites; She’s So Sensitive; Bonita; If You Ever Come to Me/Change Partners/Canto Casual