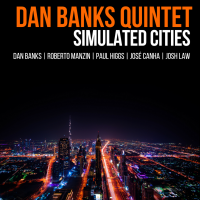 Simulated Cities, the second recording by British pianist Dan Banks' well-schooled quintet, consists of seven original compositions by the leader, the bulk of which call to mind the storied hard-bop conclaves of the mid 20th century while enwrapping the music in an up-to-date wardrobe tailored to accommodate today's more sophisticated and savvy audiences. Once past the tweaks, however, the thematic core remains constant: intrepid, straight-ahead jazz that has stood the test of time while pleasing enthusiasts of every age and circumstance.

A second constant is the makeup of Banks' quintet, with trumpeter Paul Higgs and tenor saxophonist Roberto Manzin sharing the front line, bassist Jose Canha and drummer Josh Law rounding out the rhythm section, lending the session a "working group" vibe that amplifies its natural symmetry. It's clear from the outset, Banks' New Orleans-style "Secondline Sidestep," that everyone is on the same page, as Canha and Law keep the spasmodic rhythm cooking on all burners behind crisp solos by Banks, Higgs (muted) and Manzin and snug section work by all hands.

Banks veers away from the hard-bop mode with the even-tempered ballad "Changing States" before re-engaging the throttle and amping up the RPMs on "ETR 500" whose animated persona provides a colorful backdrop for nimble solos by every member of the group. The tempo slows again on the beguiling "Vistas of Shangri-la," a picturesque showcase for Manzin and Higgs on which Banks displays his talents as soloist and accompanist. Manzin is unreserved, Banks free and easy on the well-grooved "Simulated Cities," which leads to the pensive "Prince of Sorcery," wherein Higgs shows his mastery of the ballad form while the ensemble proves it can flourish in any climate. More buoyant bop licks animate the bright and rhythmic finale, "Samba de Primavera," which wraps up a generally sharp and spirited second outing by the impressive Dan Banks Quintet.