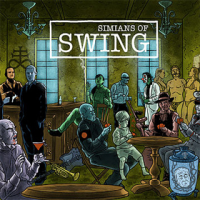 Sometimes the best legends are the ones you create about yourself. The Simians of Swing, whose debut release this is, understand. As this legend has it, the London-based band is co-led by an ex-member of the Russian mafia—skilled in the martial arts—and a man who spends his days playing chess on his own while meditating on the role of bass frequencies in global geopolitics. Their songs tell tales of heroes and villains—mostly villains and mostly, one assumes, old colleagues from the murky days of international crime and espionage. Thankfully, their day jobs haven't prevented them from learning how to play jazz.

Bop-inspired trumpeter Andy Davies (the mafioso) and bassist Lorenzo Bassignani (the solo chess master) lead the Simians, a band name that reflects Davies' nickname of "Monkey" (unless that's also part of the legend). The pair also take their inspiration from comic books—each track on Simians Of Swing matches a comic strip from Spanish artist Valentin Ramon. The core band is completed by guitarist Luca Boscagin and drummer Saleem Raman and a bunch of guest performers augment the sound, with no less than three guests on Fender Rhodes.

"Boppy" is just that, a cheerful, boppy number from Davies. It features a memorable trumpet riff allied to Raman's swinging drums leading into solos from Davies, Fender Rhodes player Benet McLean and guitarist Boscagin underpinned by more aggressive drums and electric bass. "Vampires In The Attic"—another Davies composition—is more fluid than "Boppy" but just as cheery. "Zion" closes the album in a similar vein, a fast-tempo tune with Davies' cascades of notes and McLean's Rhodes at its heart.

Polly Gibbons sings on the noir-ish "Gangster In Love" and the more soulful "St Lucia," two songs that swap the good cheer of the opening duo for a more downbeat worldview. This more melancholy side of the Simians of Swing continues with the mournful "Walt" and the elegiac "Soviet Supreme," a quartet performance recorded live at London's Vortex club, showcasing Boscagin's guitar solo. Slow or fast, upbeat or downcast, the Simians of Swing is an impressive and enjoyable outfit and this self-titled debut is a welcome entry into the band's comic-book inspired music.

About Simians Of Swing