BY NENAD GEORGIEVSKI
January 11, 2007
Sign in to view read count 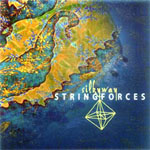 When String Forces was founded, its initial idea and mission, as the name itself suggests, was to create and perform acoustic music. As time went on, the name of the band remained, but its music changed and matured, welcoming electronics, samples and even rhythm machines, combined with live drumming. The group's first self-titled album, although praised by critics, passed almost unnoticed by the public. The second, titled Izohronia, showed a significant leap forward, revealing a remarkable range of sounds, emotions and approaches to music-making. It certainly brought the best out of the band, and it put them on the musical map as a leading young band.

Silky Way marks another step forward for String Forces. Just like these players radically changed their complete sound during the transition from the first to the second album, they have completely changed their sound for this release, delving even deeper into electronic music. The band delivers textural ambience, synthetic sounds, fluid baselines, world music tinges and ethereal vocals over a wide expanse of driving pulsating drums, generated either electronically or acoustically by a new member, drummer Mishko Parushev.

Guided by sound visionary Dorijan Jovanovic, String Forces has created a collage of electronic soundscapes which echo the works of Bill Laswell, Fripp and Kraftwerk; other dark ambient artists can be heard. At times these compositions fall into linear moods, but the music elegantly balances between sensibility, technique and technology. The concept ranges from ethereal instrumentals (all having coordinates instead of regular "mystical titles) to pop songs. Some of the highlights are "Preku Ezerata (Over the Lakes) and (especially) "Skriena Ubavina (Hidden Beauty), where singer Aleksandra Mangarovska enunciates her words above a spooky, soothing ambiance.

Silky Way is a hypnotic and modern record which pays great attention to detail. Perhaps a few listeners may miss some of the rough edges that typified Izohronia, but the overall feeling on Silky Way is like a soundtrack for a documentary, with a hint of mystery and intrigue thrown in.