By Glenn Astarita
January 13, 2015
Sign in to view read count 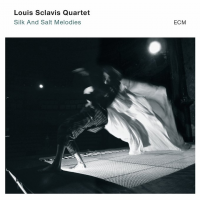 Iranian zarb (diagonally positioned drum)performer Kevyan Chemirani adds a worldly and exotic aspect to prominent French clarinetist, composer Louis Scalvis' band, featuring guitarist Gilles Coronado and keyboardist Benjamin Moussay who have performed with the leader on his Atlas Trio album, Sources (ECM Records, 2011). Sclavis' highly praised and disparate body of work for ECM Records is essentially unclassifiable, via his uniquely articulated jazz components, also framed on classical, free-improvisation, jazz fusion and world music persuasions. As a soloist, his resonant and supple phrasings are often spine-tingling and packed with melodious content. Moreover, Sclavis asserts that, "Silk and Salt" indicates my desire for this work to take an imaginary, nomadic, Central Asian route, but also to address the idea of emigration in world history." Indeed, the program radiates a genre-busting schematic. At times the music's mystical qualities impart a ghostly transition to quietly introspective moments.

The production consists of eloquent and drifting dreamscapes with movements built on rubato and excitable episodes, amped by Coronado's lightly employed distortion licks. But Chemirani's lissome percussion work introduces an air of intrigue into the mix. On "L'autre rive," Sclavis' pensive reflections evolve into passionate unison choruses with Moussay's deft piano formulations. However, the frontline dissects the core thematic foundation and lightens it up within the bridge amid some frisky call and response dialogues. As the plot thickens during "Sel et soie," Chemirani executes a forceful 4/4 groove, leading to the musicians' thorny, odd-metered time signatures, escalated by Sclavis' penetrating solos. However "Cortege," instills additional contrasts with the quintet's introspective and free-form improvisational metrics, dappled with classical undertones and cyclical percussion patterns, summoning a trance-like mindset.

Once again Sclavis marches to the beat of a different drummer, encapsulated by his largely fascinating, multidimensional compositions. He demands the listeners' attention, but places a great deal of emphasis on the immensely entertaining contours and thematic attributes, sparked by his acute vision and the ensemble's lustrous synergy.