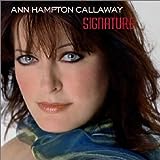 The gap between Barbra Streisand and Ella Fitzgerald is wide, a fact that Ann Hampton Callaway has no doubt discovered. Ms. Callaway began her career in the early 1980s as a rich-voiced, highly musical cabaret singer with a preference for intensely dramatic ballads. In the mid-90s, she changed directions and embraced vocal jazz. Although some of her early jazz efforts were problematic, in recent years Ms. Callaway’s substance has begun to keep pace with her form, and she has emerged as a fine, if still developing, jazz singer.

The “still developing” nature of Ms. Callaway’s art is brought home by the conceit behind her latest CD, Signature, on which the vocalist pays tribute to twelve icons of jazz and jazz-influenced pop singing. Comparisons between these interpretations and the recordings by the artists being honored are inevitable, and although the singer works hard to put her stamp on the material, too often all she has to show for it is the effort.

She opens with a version of “Tenderly” performed in the style of Sarah Vaughan that is both impressive and baffling. Few jazz singers have the chops to so closely emulate Ms. Vaughan singing in her lower register. However, after the novelty wears off, and it wears off quickly, you are left with the following question: Why listen to Ann Hampton Callaway sing like Sarah Vaughan when so many of Ms. Vaughan’s recordings are available? Similarly, Ella Fitzgerald used “You’ll Have to Swing It (Mr. Paganini)” as a framework for her scat singing. Ms. Callaway essentially follows suit, and because she lacks the rhythmic and improvisational acumen of the First Lady of Song, she suffers by comparison.

Ms. Callaway is at her best when she captures the spirit of a particular singer while still conveying her own distinctive identity. “Pick Yourself Up,” with its detour into a Bach tribute, reflects both Mel Tormé’s love of flashy musical displays and Ms. Callaway’s own precocity. She borrows, but thankfully does not imitate, one of Tony Bennett’s signature stylistic devices, shifting dynamics, on her all-the-stops-out reading of “The Best Is Yet To Come.” On “You Turned the Tables on Me,” Ms. Callaway convincingly recalls Anita O’Day’s insouciance if not her rhythmic dexterity.

Signature benefits greatly from an array of top shelf jazz musicians. The sterling rhythm section is led by pianist Kenny Barron, one of the few players who is both a great accompanist and a great soloist. Former Basie sideman Frank Wess turns up on alto saxophone playing in his customary cool, graceful style. The ubiquitous Wynton Marsalis takes several fine solos including a nod to Louis Armstrong on a gently loping “A Kiss to Build a Dream On.” Although Freddy Cole is in good voice, he and Ms. Callaway never really connect on a duet of “For All We Know.” The superb vocal group New York Voices proves to be a much better fit on the breezy, swinging “Route 66.”

Ms. Callaway’s singing suggests a person who is both highly intelligent and extremely earnest. While these qualities serve her well on a quietly dramatic “In the Wee Small Hours of the Morning,” they place the ironic detachment of the Peggy Lee hit “Is That All There Is?” beyond her reach. Ms. Callaway makes a yeoman’s effort on “Twisted,” including writing a set of Greek chorus lyrics for New York Voices, but ends up taking the song too seriously making one long for the hip, casual schizophrenia of Annie Ross.