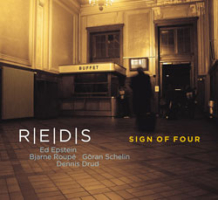 R|E|D|S is a quartet made up of an American expatriate and three Danes: baritone saxophonist Ed Epstein, guitarist Bjarne Roupe, bassist Goran Schelin and drummer Dennis Drud. Epstein and Roupe are close friends, and the saxophonist wanted a vehicle in which to collaborate with the guitarist. With this exegesis, the quartet was born.

The baritone saxophone makes for a challenging combo leader, in much the same way a football defensive back leads while waltzing a partner backwards. But Gerry Mulligan did it, and with a piano-less ensemble, no less. Epstein favors this same piano-less context, with Roupe's guitar providing the harmony.

The sheer musicality of this recording readily overwhelms releases contemporary with it. Epstein and Roupe are obviously friends, empathic and tuned in to one another's musical philosophy and craftsmanship. All ten selections on the disc are originals by either Epstein or Roupe—music firmly in the post bop mainstream, swinging freely and readily enjoyable, no digestion needed.

Epstein's tone is friendly and forceful, playing well to Roupe's soft and rounded electric guitar timbre. The rhythm section is captured sonic just behind the two principles, giving the entire recital a soft patina of resonance. All compositions are uniformly fine, playing to each participants' strengths and passion. This may be the definition of the Origin Arts Sound.