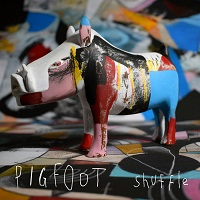 Once a taste for mischief is acquired it's hard to rein it in. Pigfoot was having way, way too much fun on 21st Century Acid Trad (Village Life Records, 2014) to go straight on this, its second outing. If the former happily warped New Orleans jazz, Pigfoot Shuffle applies a similar concept to a broader pool of music, with rock 'n' roll, opera, soul, classic rock and pop coming in for some lovingly irreverent, jazzified treatment. In other hands it might sound like a recipe for, well, a bit of a pig's ear, but Chris Batchelor, James Allsopp, Paul Clarvis and Liam Noble work their musical alchemy to wonderful effect.

The spirit of New Orleans and early jazz's joie de vivre still permeate these tunes in the smeary trumpet, bar room-style upright piano and sassy baritone saxophone chatter. The grooves, too, have The Big Easy written all over them, from dirge-inspired blues to snappy, second-line polyrhythms. The one personnel change from 21st Century Acid Trad sees tubaist Oren Marshall make way for Allsopp, but there is no lack of bottom end here. When not blowing freely, Allsopp's baritone saxophone and baritone clarinet do plenty of heavy lifting in the rhythm department. The addition of electric keyboards adds further clout to the bass lines, as well as bringing more contemporary textures to the mix.

The bawdy, slow blues of "Heartbreak Hotel," which would make a terrific striptease, is one of several songs associated with Elvis Presley. Noble tips his hat to Thelonious Monk on an angular piano intro to "Jailhouse Rock"/Hound Dog," though thereafter, the barreling, then jagged piano runs, and fiercely sparring horns conjure a Fats Domino meets Sun Ra love-in. There's more than a hint of 1930s-era Duke Ellington on an elegantly snaking version of Richard Strauss' "Dance of the Seven Veils," from the opera Salome. Equally satisfying is a sunny, Soweto-gospel take on Wolfgang Amadeus Mozart's aria "Isis and Osiris/Dove Sono," which features a great solo from Batchelor.

Elsewhere, more contemporary fare—and the greater use of electric keyboards—dilutes the New Orleans influence in favor of rock and pop aesthetics. The Motown classic "For Once in My Life" swings hard, Curtis Mayfield's "The Pusherman" is given the jazz-rock treatment, while Led Zeppelin's "Black Dog" deviates little from the thumping original. A brace of Burt Bacharach tunes, the brushes-steered ballad "The Look of Love" and the infectiously upbeat "Wives and Lovers," appeal to emotions of polar extremes.

Pigfoot's inclusive philosophy, however, is perhaps best encapsulated in the seductive fusing of the classic torch song "Love Letters" with Richard Wagner's bewitching aria "Song to the Evening Star," from his opera Tannhäuser. Here, the gentle gospel vibe and bluesy soloing are irresistible.

Pigfoot has carved out a clever niche but this is no gimmick—the arrangements are too sophisticated and the playing too impassioned for this to be anything other than heartfelt homage. Pigfoot reinvents pop music of its day, and whether one considers jazz to be pop music, these are all vernaculars that jazz has hungrily absorbed at every turn. Pigfoot Shuffle works well in the studio, but it should be an absolute blast on stage. Fun, engrossing and rather addictive.

Heartbreak Hotel; Dance of the Seven Veils; Pusherman; Jailhouse Rock/Hound Dog; The look of Love; Isis & Osiris/Dove Sono; Black Dog; For Once in My Life; Love Letters/Song to the Evening Star; Wives and Lovers.