Dizzy Gillespie: Showtime at The Spotlite

By George Kanzler
January 24, 2009
Sign in to view read count 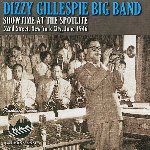 Clark Monroe's Uptown House in Harlem was an incubator of bebop, so it wasn't a surprise that Monroe gave Dizzy Gillespie a venue for reviving his big band at the short-lived (1944 to early 1947) 52nd Street club, The Spotlite, in 1946. Two CDs capture two sets toward the end of that historic engagement in June, as recorded by Jerry Newman, the same intrepid fan who recorded gestational bebop after-hours jams at Uptown House and Minton's Playhouse in Harlem earlier in the '40s with Gillespie, Charlie Parker and Charlie Christian. Considering the low-fi disc recorder source, the sound is pretty good, even if it's necessary to strain occasionally to hear solos. It's worth it for the historical importance of these recordings, a fascinating snapshot of bebop's premier big band under full steam at a club.

The definite stars are the trumpet playing of Gillespie, a marvel of technique and imagination, and the big band charts of Tadd Dameron, Gillespie and the main arranger, Gil Fuller, who brought the bebop idiom to an orchestral forum. Fuller was just a part of the strong Newark, NJ presence in this band, which also included tenor saxophonist James Moody (the main sax soloist here) and trumpeter Dave Burns. Also present, but not on the commercial recordings the band made for RCA Victor, is pianist Thelonious Monk, whose "'Round Midnight," in the seminal chart by Fuller, intro and coda by Gillespie, showcases Milt Jackson's vibes.

Many of the conventions of Swing Era arranging still held sway in 1946, most notably the idea that the band should interact with and support soloists, as typified by Fuller's concerto-like setting for Ray Brown on "One Bass Hit." "Things to Come," the quicksilver anthem, is heard three times, seemingly faster and more furious each go-around. Disc Two exudes a particularly festive atmosphere—a Moody solo eliciting hearty laughs; Dizzy even more mercurial—with Sarah Vaughan doing an intermission song and Duke Ellington acknowledged by Diz.