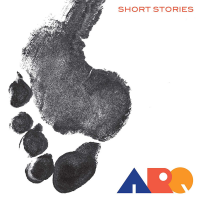 The Alison Rayner Quintet's third album is good medicine. Despite the sad events which inspired it, about which more in a moment, Short Stories tells its tales through strong melodies, sinewy rhythms and luminous solos, is by turns tender and exuberant, has an uplifting narrative arc, and simply makes you feel better for listening to it.

Rayner has been a hero of British jazz since the mid 1980s when, with ARQ's guitarist, Deirdre Cartwright, she was a member of the pioneering all-women band The Guest Stars. It was an era when it was still not unusual to hear jazz fans say of a musician, "She plays well for a woman," and even mean it as a compliment.

Some of the credit for the prominence of women among London's 2020 jazz scene is down to the Guest Stars, and to the campaigning organisation Blow The Fuse that Rayner and Cartwright formed back in 1989. BTF was active, for instance, in aiding the early careers of trumpeter Yazz Ahmed and saxophonists Nubya Garcia, Camilla George and Chelsea Carmichael, among other modern movers and shakers.

Rayner says she was moved to record Short Stories "by the sudden losses of three young people within close family and friends." Instead of writing a lament for those people, however, she decided to celebrate the joy that they brought into the lives of those who knew them. Five of the pieces on the album were written by Rayner. A sixth piece, by Cartwright, was originally written as a tribute to the late Esbjorn Svensson, and later rewritten in memory of Debbie Dickinson, the jazz activist and onetime member of The Guest Stars' support team, who passed in 2019.

There are two other tracks. "Buster Breaks A Beat" was written by saxophonist Diane McLoughlin as a platform on which ARQ's drummer, Buster Birch, could experiment with broken beats, funk and dance music. Pianist Steve Lodder's "Seeing Around Corners" was sparked by Lodder wondering whether it is always good to know what lies ahead.

Short Stories will stand up whether or not you know the backstories to the tunes. Knowing them, however, probably adds to the experience. Either way it is a great album.

Croajingolong Bushwalk; Here And Now; There Is A Crack In Everything; Buster Breaks A Beat; A Braw Boy; Life Lived Wide; Colloquy; Seeing Around Corners.