By Mike Perciaccante
August 10, 2008
Sign in to view read count 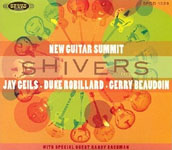 The second album from the triumvirate of virtuoso guitarists J. Geils, Duke Robillard and Gerry Beaudoin is another set of vintage jazz-blues in which the three guitarists improvise while prodding, teasing and pushing each other to greater heights. While only four of the tracks are originals written by one or more members of the group, each track fits comfortably within the swing-bop-jazz-blues context of the album.

On Shivers the three are joined by yet another brilliant guitarist, Randy Bachman (The Guess Who/Bachman Turner Overdrive) who not only plays on two Mose Allison tracks ("Your Mind Is On Vacation" and "Everybody's Crying Mercy") but takes the vocal—the only vocals on the entire 11 track set. The other well-chosen covers include "Broadway," Benny Goodman's "Flying Home," Fats Waller's "Honeysuckle Rose" and the title track, which was composed by Charlie Christian and Lionel Hampton. Though technically a cover, the band has rearranged the early rock 'n' roll classic "Little Bitty Pretty One," and given it a distinct swing flavor.

"Wellspring Blues" is credited as being composed by Beaudoin/Geils/Robillard, yet its sound is timeless. It's bright, clear and crisp guitar tone would easily fit on any Benny Goodman recording. Beaudoin's "Blue Sunset" has a gorgeous soothing melody, while Robillard revisits his "Jim Jam," from Swing album (Rounder, 1988). The version here is bouncier, meatier and fuller than the original as the players create a three-part electric guitar harmony that almost sounds like a sax section.

Every track is vital, lively and fun. This CD is an entertaining and enjoyable collection, calling the '40s without sounding dated. The three guitarists have amazing chemistry and play well together, with Bachman adding additional color and hue. Hopefully, he'll join Geils, Robillard and Beaudoin on the next New Guitar Summit release.

Visit J. Geils and Duke Robillard on the web.