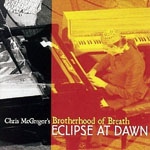 This one only goes to show how easy review writing can sometimes be. Imagine a band that on the occasion captured for posterity here consisted of eleven pieces caught on a night when they were in sparkling form. That doesn't do it justice. Arguably as much a political statement by dint of its very being as much as it was a musical aggregation, South African pianist McGregor's Anglo-South African band always specialized in music that was vibrantly and urgently alive. There's enough evidence in support of that here to stand up in a court of law.

There would be little point in trying to pinpoint quite how this band managed to hit the heights so consistently, however. It would be far more constructive to discuss the assertion of life that this program amounts to. The twelve minutes of "Restless" has it all in microcosm. The free blowout that it largely is, perhaps unconsciously but happily avoids the kind of crude machismo that's often a hallmark of such exercises, whilst drummer Louis Moholo's work is as much that of a perpetual motion machine as it is that of a drummer as such. The roller coaster of his augmented dance with McGregor's piano is in essence an earthy affair, albeit one with its eyes upon the most expansive vistas. Marc Charig's trumpet is an amalgam of Donalds Byrd and Cherry even while its shot through with his own musical personality.

This was a band that could do lyricism as well, as it proves on Abdullah Ibrahim's wide open title track. Here the polyphony is paradoxically expansive yet measured, Mike Osborne's quicksilver alto sax lines are shooting through the fabric of the music like the work of a man for whom complete focus was second nature.

McGregor's "Now" comes on like a piece taken from the bottom up and that impression comes in no small part from the centrifugal energy generated by the cartel of Moholo and bassist Harry Miller. Again Charig's solo is right on the mark, even if several bars of it are off mike. This audio shortcoming however, has the effect of adding to a performance of which every moment is vibrantly, cogently alive. The same goes for Alan Skidmore's tenor sax, although at this point in his musical career, he alludes only tangentially to John Coltrane's sheets of sound. When he's joined briefly by some of the other saxophones, the effect is akin to that of a bandstand igniting for all the right reasons.

Any lauding of this band that might be happening right now is more than justified on the basis of this evidence. As an affirmation of life the music is almost tensile and joys of every order are celebrated here. Join in with that celebration and proclaim it from the rooftops while you're at it. You know it makes sense.