Maximize your visibility at All About Jazz by upgrading your musician page from standard to premium. With it, you'll receive All About Jazz home page exposure, a highly stylized / ad-free musician page with bonus features and benefits, an ad, plus you control where you sell your music and so much more.
Learn More
314

BY DAVID RICKERT
October 7, 2010
Sign in to view read count 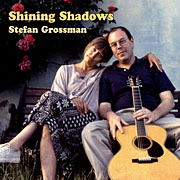 It makes sense that Stefan Grossman and Eric Clapton hung out together in the sixties, because they both have similar approaches to the guitar: Clapton isn't the flashiest of players, but can craft lines out of a few notes that are filled with feeling and taste; Grossman is a like-minded player—not one to create finger-busting arrangements like other guitarists that he's featured on his Kicking Mule label, but nevertheless crafting tasteful songs that rely on a myriad of influences, from American folk to old Irish tunes and rural blues, sometimes all within one song.

Originally released in 1984, Shining Shadows is one of Grossman's best Grossman albums to date. It kicks off with the fairly conventional yet pleasant blues, "Blues for the Mann," followed by "Requiem For Patrick Kilroy," one of Grossman's best songs—an open-tuned melodic original that goes through several different moods and colors in a few short minutes. It sets the tone for the rest of the album, a collection of originals impossible to pigeonhole into any particular style. There's the melancholic "Logan's Water," the tart briskness of "Lemon's Jump," and the exceptionally beautiful closer, "Lament for a Goodman." The tour de force, however, is the suite-like "Sparkling on the Wind," a delightfully expressionistic exploration of a variety of modes and tempos that never gets boring in all its seven-plus minutes.

Ever the dedicated educator, Grossman has included tablature for all of the songs on this CD, in PDF form. These songs will be challenging, yet within the reach of most burgeoning finger-pickers—although, having not tried them, they could be deceptively tricky. Grossman recorded some of the most vital finger-pickers out there; with Shining Shadows, he proves he could hold his own with the best of them.