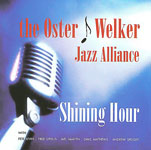 San-Francisco-based Jeff Oster has one of those happy-sounding voices that make you feel happy, too. Even a depressing kind of song like "Sophisticated Lady" leaves the impression that, after all of that "smoking-drinking-never-thinking-of-tomorrow" stuff, everything will turn out okay. But it isn't until Oster scats that you really submit to his affable sound and just want to be BJFF (best jazz friends forever).

Oster is no newcomer to vocal jazz, but he's not yet received the kind of attention that his ability might have garnered. After an early foray into professional singing, Oster took a 20-year hiatus to raise his family; one propitious evening in 2006 he stumbled into the sightlines (or "earlines," perhaps) of Peter Welker and sat in with the trumpeter's band.

On the Oster Welker Jazz Alliance's first CD Shining Hour, the pair offers up a shared vision of 11 mostly-known jazz standards and a couple of lesser-known tunes—like the opener, "Sweet Pumpkin," a swinging, almost-forgotten ditty that introduces Welker as a master arranger and the backing big band as both singer-friendly and a musical force in its own right.

Despite the deserved focus on Oster's vocals, Welker's band has plenty of solo time throughout the recording, on the title cut and most notably on Oster's vocalese original, "Bean." To emphasize the contribution of the instrumentalists to the recording, an asterisk appears next to each soloist's name in the song listings—would that more vocal albums provided such a handy reference. One curious thing, though: Welker plays second trumpet throughout the disc but only solos once, on flugelhorn, dropping in and out with some mournful measures on the closing number, "A Time For Love." One might regret his modesty.

One of the sweet surprises on the disc is the team's mid-tempo swing version of "Laura," a beautiful melody rarely performed by singers, given the dearth of singers in the genre who can take on the lyrics (in short, it's a guy's tune). True, there aren't a lot of guys singing jazz these days, but the ones who are—like Oster—dazzle all the more for their rarity.

About The Oster Welker Jazz Alliance