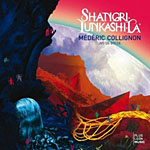 Less known than he should be outside his native France, Médéric Collignon is something of a jazz celebrity at home. A winner of multiple awards, the trumpeter/keyboardist/vocalist has participated and collaborated with the esteemed Orchestre National de Jazz, and can be heard on clarinetist Louis Sclavis' idiosyncratic Napoli's Walls (ECM, 2003). With Shangri-Tunkashi-La, Collignon brings a fresh perspective to the electric music of trumpet icon Miles Davis.

Material culled exclusively from Davis's late-1960s/early-1970s electric period is distanced from the plethora of electric tributes cropping up over the past several years by a number of key factors. Despite being a fine trumpeter, Collignon—whose reputation for being something of a absurdist madman—often uses his voice as the primary instrument, replacing Davis' signature horn on "Shhh Peaceful / It's About That Time" with wordless vocals ranging from melodically reverent to piercing screams so high in the stratosphere that it's hard to believe they're from a human voice. Some of what he does could be called scatting, but Collignon is more unfettered, as he occasionally digresses into tangential utterances, and garbled and guttural strange-speak.

Collignon's expansion of his core quartet with a four-piece horn section also gives Shangri its fresh outlook. Few jazz arrangers, outside of Vince Mendoza, use horns more typically associated with classical music this successfully. Combined with Collignon's sometimes warm, sometimes piercing and always inventive pocket trumpet, the horn ensemble turns the balladic "Early Minor"—a lost 1969 treasure first heard on Legacy's The Complete In A Silent Way Sessions box in 2001—into a sublime tone poem that's closer in aesthetic to the way its composer, the late Joe Zawinul, might have envisioned it, based on the late keyboardist's own "In a Silent Way" on Zawinul (Atlantic, 1970).

The high octane "Ife," and equally fiery "Interlude" (first heard on Agharta (Columbia, 1975), but sporting a riff that Miles would revisit in the decades that followed) give his group plenty of opportunity to ratchet up the intensity...and the volume, with the quartet as comfortable pushing a visceral groove as it is diving into freer territory. Equally, Collignon knows how to pace himself, and his program. "Mademoiselle Mabry," from Filles de Kilimanjaro (Columbia, 1968), is a rarely chosen cover; a lyrical tone poem that sets up the album's most oblique choice—Led Zeppelin's "Kashmir," which closes the 66-minute set. That this thunderous, eastern-tinged rocker fits so seamlessly into the rest of the program only serves to demonstrate a cross-over potential Miles always had, regularly aspired to, but never quite achieved in his lifetime.

Gritty, virtuosic playing from a hard-edged group that knows how to kick it hard yet play it soft and subtle when required make Shangri-Tunkashi-La a fusion fest that's impossible to ignore. Add to that Collignon's forward-thinking yet sonically retro arrangements and liberal doses of impish sardonicism, and the result is a homage to electric-era Miles Davis that easily stands amongst the best of them.