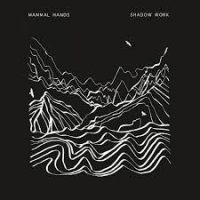 Our best musicians can soak up influences from many diverse sources, assimilate them into their own style, and allow them to emerge during improvisation. This is why, as readers of this site will surely be aware, a piece can sound different in the hands of two skilled jazz musicians even when the raw material of the composition is constant. When this level of openness is maintained over time it can allow musicians, such as Mammal Hands here, to show a progression and evolution in their music and sound even where the instrumentation is more or less constant.

There may have been a relatively short period between 2016's excellent, Matthew Halsall produced, Floa album and this enjoyable new collection but there are definite changes. Mercifully this does not mean that the gentlemen have forsaken their fascination with the repetitive piano patterns of Steve Reich for, say, an appreciation of the empty bombast of adult orientated rock, but there is a clear nod towards an ambient electronica influence. This tends to be subtle shading, such as in the sound wash around the edge of the stereo image on opener "Black Sails," which freshens things up rather than signalling an imminent David Guetta remix or dubstep reinvention. The bird song that adorns album closer "Being Here" is another good example, giving the piece something of the feel of Leyland Kirby or even 1990s F-Communications stalwarts A Reminiscent Drive.

This is an intriguing approach for an act nominally within the broad tent of 'jazz,' that clearly differentiates Mammal Hands from the many piano trios that inhabit that world. It also highlights the growing delineation of their sound from that of former label mates GoGo Penguin, with whom they are often compared. While both acts are piano trios aware of electronic music made post acid house, the use of Jordan Smart's saxophone in place of the traditional bass pushes the sound away from the incorporation of the more muscular riffs of rave culture towards the repetitive patterns of modern classical minimalism.

Shadow Work is their third album and the first that the band has self-produced, albeit with the usual exemplary engineering assistance from George Atkins at 80Hz Studios in Manchester. The differences are subtle—there is for example experimentation with muting the piano with felt on three tracks, like the reflective "Solitary Bee." This has the effect of making Nick Smart's piano become less prominent in the mix, relatively emphasising and bringing a sharpness to the sound of the saxophone. There is also the excellent percussion work from Jesse Barrett that particularly comes to the fore on tracks like "Three Good Things," surely the band's motto if translated into Latin, and the excellent drum and tabla led climax to album stand out "Transfixed." The other piece that has deservedly attracted attention in the last few weeks, on the back of an excellent promotional video (embedded below), is "Boreal Forest" -a slow burning ambient piece that builds into a fine piano and saxophone drone that fills the soundscape and the room in its intense final section.

Unusually for Gondwana the cover is puzzling, resembling an enlarged cross section of the image of radio pulses used on Joy Division's 1979 Factory Records classic Unknown Pleasures. It feels like an odd piece of mis- direction given the markedly different creative direction Mammal Hands have taken to the late Ian Curtis and co, and with both labels being Manchester based it is almost inconceivable that no-one made the connection. Still as the saying goes you should never judge a book by its cover—Shadow Work shows an admirable musical development for Mammal Hands, that suggests they will continue to delight us for some time to come by finding ways to keep their trio sound fresh and inventive. A band for the long haul then, and an album that is warmly recommended.