By EYAL HAREUVENI
December 27, 2013
Sign in to view read count 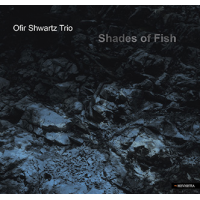 On his sophomore release, Israeli pianist Ofir Shwartz leads a new trio comprised with Israeli double bassist Gal Shaya and Slovenian drummer Gasper Bertoncelj. This release features Shwartz's progression as a composer and bandleader since his debut release, Earlier in time (sHmoo Records, 2010).
<
Shwartz's vocabulary draws inspiration from modern jazz— mainly in its myriad lyrical incarnations, pop songs, and progressive and heavy rock. His gift to sketch highly melodic themes is apparent throughout this recording. His trio is playing in a highly disciplined, tight and supportive form, with passion and energetic flow.

The trio shines when articulating the infectious themes of "When It Ends" and even more on "Industrial City" (including its reprise), unfolding the strong themes with playful command, turning these melodic and energetic compositions to catchy pop songs. But this trio also sounds addicted to these dramatic formats, attempting to find glorious, power chords and tempting grooves on account of deeper abstraction of the theme and risk taking form of interplay.

The only composition that escapes this structure is the moving ballad "Folk Song," the most impressive composition on this album, and to a lesser degree "It's Wet Outside." The meditative theme of "Folk Song" is implied, alternately by Shaya and Shwartz while Bertoncelj adds colors and spare dramatic dimension, never delivered with full force. This composition demonstrates the formative influence of the aesthetics of ECM school of lyrical jazz—Keith Jarrett obviously, but also the influence Bobo Stenson—had on Shwartz.

Shwartz only begins to feature his compositional skills. Shades of Fish is another sign that he is on the right way.