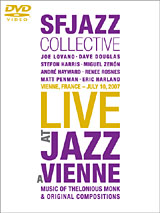 While the repertory on Live at Jazz à Vienne comes from SFJazz Collective's then-unreleased CD Live 2007: 4th Annual Concert Tour (SFJAZZ), the unit that ambles onstage here and launches into the chaotic opening of Thelonious Monk's "Brilliant Corners is very different from the lineup featured on the double-live disc. Gone are Joshua Redman and Bobby Hutcherson; they had been with the Collective from the beginning, with Redman doubling as artistic director. Losing one player of this caliber would put a hitch in any band's get-along; losing two should have left a hole a bus could have driven through.

Once again, the Collective's revolving-door personnel policy stands them in good stead, as Joe Lovano and Stefon Harris step into Redman and Hutcherson's respective roles. In a year where the Collective's muse was Monk—the quintessential New York bebopper—it is pure serendipity that these two Noo Yawkers were joining another Empire State resident (and another new member) on the front line: Dave Douglas had replaced Nicholas Payton at the start of the Collective's 2007 cycle. For the concertgoers in Vienne, the performance was one more great set, completely consistent with the Collective's usual standard of quality; for anyone familiar with Live 2007 it is so much more.

For one thing, we get to see the effect this music has on these players. A palpable joy leaps off the stage as the set progresses: Lovano is always the life of the party, but his demeanor here is even happier than usual; even though he has no solo or comp art to play on Matt Penman's "Haast Pass," Harris stays onstage and digs on his ringside set during Douglas and André Hayward's fiery duet; we get a glimpse of Douglas bouncing to the groove during Hayward's solo on "San Francisco Holiday (Worry Later) ; Eric Harland—who is a blast to watch in concert anyway—is definitely feeling his happy place as he employs every aspect of his arsenal to drive the music even further than before. The crowd loves it all, but they especially love it when Penman and Douglas do their between-songs patter in French.

Although the group stays true to the 2007 arrangements, there are notable differences—not surprising, since this music was already road-tested. The sound is broader, the solos a little more daring. The biggest differentiation comes from Douglas: he was relatively subdued on 2007, but now we see the rampant aggression his fans have come to know and love. Lovano brings the same energy as Redman, but with a deeper tone and a sense of adventure that is seriously infectious. You see this on the in- the-clear alto/tenor duet during Harland's glorious set-closer "Union : on 2007, Redman and Miguel Zenón laid down an expanding vamp that was seriously hypnotic; Lovano's soaring treatment drives Zenón to leave that vamp and find new heights of his own.

This concert originally appeared on French public television, and you can see a real appreciation for the band and for jazz in concert. The sound is crisp and studio-quality, and some of the camera angles are phenomenal. A shot of the front line finds a gap between Harris and Hayward, giving us a perfect picture of Harland hard at work. A two-shot from behind Rosnes and Harris is taken at an angle, evoking Old School television presentation of jazz. Most importantly, the director gives fingering equal time with faces, letting the viewer see how the players make this beautiful music.

Unfortunately, the source material limits what the DVD has to offer: there are no backstage interviews or special features, either about the concert or about SFJAZZ—the Left Coast's biggest non-profit jazz venture. But while it would have been good to see how Lovano and Harris were integrated into an established matrix, keeping the package simple is in keeping with this unit. Unlike Jazz @ Lincoln Center (which has become a cult of personality) it's all about the music for the SFJazz Collective. Live at Jazz à Vienne is a great introduction for newcomers to the Collective; for those who know the group already, it's more of the same great stuff, only in pictures.

Production Notes: Originally filmed for broadcast on French Public television, the DVD captures the all- star octet live in concert in Vienne, France on July 10, 2007. Live at Jazz Vienne is available exclusively via sfjazz.org and from the SFJAZZ Store located at 3 Embarcadero Center, Lobby Level, San Francisco, CA 94111. All region DVD format.