By Bruce Lindsay
January 5, 2014
Sign in to view read count 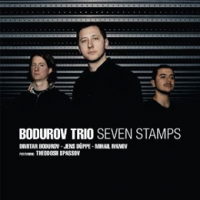 Bulgarian pianist Dimitar Bodurov may reside in Amsterdam but his love of his homeland's folk culture remains strong. On Seven Stamps, the fourth album from the Bodurov Trio since its formation in 2001, Bodurov continues his exploration of Bulgarian folk music and the "rhythm in 7" which gives the album its title. The exploration on this set of Bodurov's original compositions mixes jazz and Bulgarian folk together in a series of fascinating and enjoyable musical interactions.

As a trio, Bodurov, drummer Jens Düppe and bassist Mihail Ivanov are characterized by a punchy, confident, sound and an easy-going groove. It's a readily accessible sound, akin to the UK's Neil Cowley Trio in its positive and good-natured approach and exemplified in particular by "Elenino" and the jagged, racy, "Mychenitsa."

It's a great sound, but the group's music really takes on a character of its own with the addition of guest musician Theodosii Spassov. Spassov plays the kaval, a wooden flute with a warm, earthy sound. Although it's common throughout the Balkans and other parts of eastern Europe, it's rarely heard in a jazz context. On Seven Stamps it fits in so effortlessly with the trio's piano, bass and drums that it's hard to believe that the kaval isn't one of the jazz world's key instruments.

Of the four tunes featuring Spassov it's "Stoyanele" that brings Bodurov's Bulgarian folk influences into their sharpest focus. It features an uncredited female vocal alongside Spassov's kaval. Both performers give passionate, emotive, performances underpinned by sympathetic playing from the trio.

There are actually eight tunes on Seven Stamps. "When Danube Dried Out" is listed as a "bonus track" and a rather fine bonus it is. Another uncredited vocal (Spassov, perhaps?) opens the tune and immediately gives it the folk-ish flavor that characterises the other tunes that feature Spassov and his kaval. The gentle voice is counterpointed by Ivanov's's strident bass to create a striking musical contrast, ending Seven Stamps on a high point.