By MARK CORROTO
February 24, 2014
Sign in to view read count 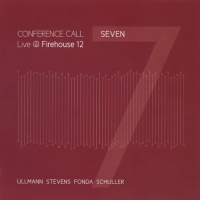 The collective quartet Conference Call performs music within the egalitarian principles of jazz as a democracy, confirming that a band can be both leaderless and led by different players without diminishing the quality and character of its music.

A working band since 1998, the lineup of reed player Gebhard Ullmann, pianist Michael Jefry Stevens, and bassist Joe Fonda employed multiple drummers in its first three years, including Matt Wilson, Han Bennink, and Gerry Hemingway before inviting George Schuller to hold down the drum chair. His selection speaks to the chemistry of this band, and its true collective nature.

Seven: Live @ Firehouse 12 is their seventh release, fifth in this current lineup and it follows What About The...???? (Not Two, 2010) (also a live recording) and the studio release Poetry In motion (Clean Feed, 2008).

The amazing feature of this band might not be that they interact so well, but that they actually have time (make time) to play together. Each player leads multiple bands and is a member of various ensembles. Among others projects, Ullman leads his Clarinet Trio, the Ullmann/Swell 4, and Tá Lam Acht. Fonda can be heard in 18 different bands and Barry Altschul's The 3dom Factor (TUM, 2013) made many a top ten list last year. Stevens juggles 15 different bands, with the longstanding Michael Jefry Stevens Trio a favorite. Likewise Schuller is the choice drummer for Michael Musillami and Jason Robinson.

Seven was taken from the September 26, 2008, performance and it is presented here unedited and uninterrupted, each set comprising one disc. What is unique here is the manner in which the music making is passed around; not the typical head-solo- head arrangements, but composed changes and neatly orchestrated improvisation. Stevens trinkling/tinkling piano opens "Poetry In Motion" before Ullman's bass clarinet enters in unison and the band goes about unfurling intricate patterns that detonate into improvisation. The band, though, maintains the song's structure bringing the audience back from the brink. The same is true for all the music here. Highlights include "29 Shoes" with its extended technique opening that coagulates into a burning run (check out Fonda's nimble fingers), the Ornette Coleman-inspired "A Map Would Help," a clever chamber jazz piece "Quirky Waltz," and "Desert... Bleue... East..." a melancholy blues." Each varied track is a mini-exercise in group interaction and the power a disciplined improvisation that complements the composed music.