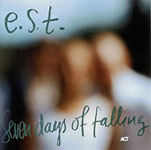 Now in their tenth year, the Swedish piano trio e.s.t. has gradually evolved into a significant force on the European scene, playing to packed houses and releasing records that figure on jazz and pop charts. Why they've never managed to achieve the same level of success in North America is a mystery. The more elegant alternative to the Bad Plus, they share a similar penchant for song-like structure, but with a more delicate approach, clearly rooted in Bill Evans and Keith Jarrett, as opposed to the Bad Plus' roots in Thelonious Monk. They even shared labels, with Columbia releasing the '01 compilation Somewhere Else Before as well as their compelling '02 effort, Strange Place for Snow.

Sadly, they mustn't have moved enough copies to satisfy Columbia's powers that be, because their most recent disk, Seven Days of Falling , has remained noticeably absent from the shelves in North America for nearly a year. Finally 215 Music has stepped up to the plate to release the disk along with a bonus DVD containing four songs from their European live concert video, Live in Stockholm , and that makes the package as good an introduction to the group as any, as well as satisfying existing fans who have been waiting for this album for many months.

With Seven Days of Falling e.s.t., consisting of pianist Esbjörn Svensson, bassist Dan Berglund and percussionist Magnus Öström, moves even further towards song form, and ups the ante in terms of what has traditionally been more subtle electronic processing. "Mingle in the Mincing- Machine" starts with a fuzz bass and clangy industrial-sounding percussion that drives a bouncy melody before moving into a rhythmical ostinato over which Berglund delivers a raucous solo. Svensson's solo is more subtly treated, with light washes in the background. Still, while the electronics are more overt than before, e.s.t. manages to use them in a refreshing way that adds to the music without completely defining it.

Contrasting up-tempo tunes like the bass-driven "Did They Ever Tell Cousteau" and the weighty "O.D.R.I.P.," the album also has its share of tender moments, including the sparse opener, "Ballad for the Unborn," and the poignant "Believe, Beleft, Below," which reappears as a bonus hidden track, with vocals from an unknown singer. Regardless of the context, the constant throughout is Svensson's innate lyricism and ability to weave a convincing story with his improvisations, as on "Elevation of Love," which leans towards a Metheny/Mays writing style.

The fifty-minute concert footage on the DVD, which also features a music video and thirteen- minute interview, are all tunes taken from Somewhere Else Before , but in concert e.s.t. takes these simple pieces, including "Dodge the Dodo," the closest thing they've had to a "hit," and develop them into lengthier excursions that demonstrate just how strong they are, individually and collectively.

An excellent package that highlights where they've been and where they're going, the North American release of Seven Days of Falling is an event that has been all too long in coming.

Ballad for the Unborn; Seven Days of Falling; Mingle in the Mincing-Machine; Evening in Atlantis; Did They Ever Tell Cousteau?; Believe Beleft Below; Elevation of Love; In My Garage; Why She Couldn't Come; O.D.R.I.P.