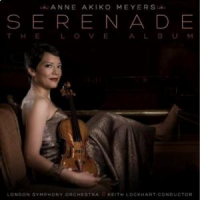 One of the creative aspects of music that stands to be lost with the continued atomization of the industry where the long-playing record album of compact disc gives way to the individual song as the commodity unit, is the art of programming a multi-piece recording. The vinyl record album and, more so, the compact disc, has always provided classical music a format with ample time to contain a given piece of music. The format offers plenty of time to capture the entire performance of most symphonies, concertos, and chamber pieces.

While the CD may becoming the LP of the 2020s, it still remains the proper meeting place of selections of music that have been brought together beneath one thematic auspice or another. Here, the programming of a collection becomes important. An intelligent concept can allow a collection to "pop" like egg-shell white against a pastel background. Which brings us to violinist Anne Akiko Meyer's Serenade: The Love Album. It is the arc of the virtuoso's experience to first make his or her way through their chosen repertoire before approaching music with a more popular flavor. This often ends badly, with maudlin collections of syrupy renditions or Romanic favorites.

Gratefully and gracefully, Meyers programs a cogent and thoughtful collection of pieces, addressing several different ends at the same time. First, Meyers celebrates the centennial of conductor/composer Leonard Bernstein's birth by performing his "Serenade" based on Plato's Symposium, which opens the present release. She bookends the release with a performance of "Somewhere" from West Side Story, newly arranged by J.A.C. Redford, who also provides a new arrangement for Ennio Morricone's "Gabriel's Oboe" from The Mission. Second, Meyers celebrates her parents' Golden Wedding Anniversary as a central muse for Serenade: The Love Album. And, finally, Meyers achieves creative coup de gras in having several bright, contemporary minds to produce fresh settings for some stage favorites.

Meyers' tone is, in even measures, fecund and earthy (Gershwin's "Summertime") and stratospheric (Piazzola's "Oblivion"). Keith Lockhart is an inspired choice to lead the London Symphony Orchestra in this New World collection. Thematically taut and intelligently conceived, all that was needed for this project was the grace and presence of Meyers, whose touch makes gold here.

Serenade (after Plato’s “Symposium”); Love Theme from “Cinema Paradiso;” Laura; Someone to Watch Over Me; Summertime; Gabriel’s Oboe from “The Mission;” Emmanuel; Jalousie; Oblivion; Wish Upon A Star; I’ll Be Seeing You; Somewhere.