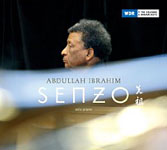 On the solo piano Senzo, South African-born pianist Abdullah Ibrahim is heard in fine form on 21 compositions, with Duke Ellington's "In a Sentimental Mood" the only standard in the bunch. Though each track bears a different title, Ibrahim allows the pieces to flow together using creative modulations and segues. On the whole, Senzo further solidifies Ibrahim's reputation as one of the jazz world's master melodists and improvisers. Ibrahim moves from the discordant, free-sounding improvisation of "Ocean and the River," and the joyous, township-jive sounds of "Tookah" and "Banjana, Children of Africa," to the soulful and meditative "Blues for a Hip King"—a tribute to Ellington, an early musical mentor.

Where Senzo falls short is in its tendency to get too deep and meditative. Without a rhythm section to guide him along, Ibrahim seems to get lost in space at times, exploring ideas that don't resolve themselves. The album doesn't really start to swing per se until Ibrahim settles into rhythmic, South African grooves on "Tookah" and "Pula," nearly half-way through. Unfortunately, by "For Coltrane," Ibrahim changes feels and is mired in a pleasant but listless melody.

Because of the continuous flow of Senzo, skipping around can make create the feeling of being a bit lost, lending to the more classical feel of the album. On the plus side, the sound quality is gorgeous, making it possible to truly appreciate the tender, earnest warmth of Ibrahim's sound. While this is a fine recording, those new to Ibrahim might find a more accessible entry point to his music in one of his recordings with a rhythm section, such as the live Cape Town Revisited(Enja, 2000), which features the talented yet seldom-heard South African trumpeter Feya Faku on several tracks.