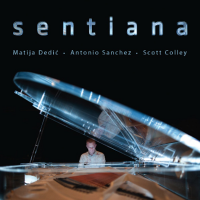 Croatian pianist Matija Dedić demonstrates exquisite taste in selecting trio mates for his projects. His debut—From The Beginning (Dallas Records, 2009)—brought him into contact with bassist Larry Grenadier and drummer Jeff Ballard, best known for their work in pianist Brad Mehldau's acclaimed trio. The follow-up record—M.D. In N.Y.C. (Origin Records, 2011)—found him working with bassist Vicente Archer and drummer Kendrick Scott, a pair that's done fine work together with pianist Danny Grissett. On a portion of this album, his third to date, he's aligned himself with drummer Antonio Sanchez and bassist Scott Colley, a dream team of a rhythm combo that's worked with everybody from vibraphonist Gary Burton to pianist Kenny Werner to trumpeter Alex Sipiagin.

Dedić's fondness for turning to such fine players may lead some to believe that he's trying to trade on the reputation of others, but that's simply not the case. It's abundantly clear, long before the album-opening title track is even through, that Dedić is the real deal. He possess the technique, confidence and creativity to match wits with all of these men. The odd-metered opener, cooking "Coutlett," and expansive-and-probing "Deep" all paint him as a sharp shooter with a firm gaze on his target(s) and the reflexes and skills necessary to carry out his mission(s). He's prone to voluble runs and solos, but he also takes pleasure in the art of rumination, chewing on an idea as his mind and hands sort things out in real time.

The solo piano numbers presented herein—"Freerony," a searching "Green Dolphin Street," "Helia," and several others—give pause to admire Dedić's fleetness, sophistication, and sense of drama. The group numbers, while highlighting many of the same traits in his playing, turn attention toward the triangular chemistry at work. Colley's pliant bass lines, Sanchez's strong rhythmic currents, and Dedić's animated piano work make for a winning combination. While established patterns indicate that Dedić will probably turn to a different rhythm team for his next release, it would be nice to hear this group go for another ride together.