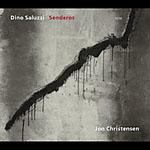 The idea of nearly eighty minutes of bandoneon/percussion duets can appear somewhat daunting. On the other hand, the bandoneon is a full-range instrument, and nobody seems to bat an eye at piano/drums duets like Italian pianist Enrico Pieranunzi's recent encounter with drummer Paul Motian, Doorways. Still, one wonders whether or not such a concentrated dose would be palatable.

The answer, when the bandoneon player is Dino Saluzzi and the drummer is Jon Christensen, is a resounding yes.

Senderos began as a solo project in the manner of earlier recordings like Kultrum and Andina. When label owner/producer Manfred Eicher suggested that Saluzzi bring in Christensen for a bit of percussion on a couple of tracks, what began as simple embellishment turned into a three-hour session, after which the two artists realized that they had recorded an album.

Both musicians approach their instruments with both a reverence for deep tradition and an adventurous spirit that sees such tradition as a mere starting point for more extended invention. Only two players with this kind of approach could record an album like Senderos. On Christensen's '04 Rarum XX compilation, his liner notes simply read, "Band feeling is more important than bravura; Less is more; How fast can you play slower?; A beat is not always what you think it is." Christensen's commitment to finding the rhythmic nooks and crannies while avoiding anything remotely obvious is what makes his work with Saluzzi so compelling.

One of Eicher's strongest suits as a producer is his ability to order pieces so that an album takes on a larger narrative. The sequencing of the fourteen pieces on Senderos—ten duets, of which four are free improvisations and the rest Saluzzi compositions; plus four bandoneon solos—is so effective that the silence between tracks becomes an equal component, and the entire album feels like a continuous suite. While one might think that the limited textures would wear thin, over the course of repeated listens one is drawn into an aesthetic where the incredibly nuanced dynamics of each player create variations that, while often most subtle, develop a richly vivid audioscape.

Saluzzi is exceptional on his instrument in the way that he blends his Argentinean folkloric roots with broader concerns that include atonality and a clear understanding of the jazz tradition—often within the confines of a single piece, as on "Huellas." Christensen's elasticity of time means that his contribution often appears to be more about colour, but surprising rhythms often emerge in places, and in ways one would not expect.

Senderos is the kind of album that requires listeners to give up any notion of convention; it also expects them to permit themselves to be drawn into a world of delicate shadings and understatement. Senderos may be unconventional, but it is still approachable in its refined lyricism. One need only listen.