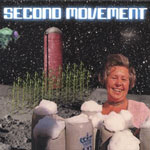 Nine songs usher the listener into a groove-oriented setting as the band (which has been together since 2003) heartily performs an assortment of old and new school sounds with nods to the '70s on "Featherweight, with its recognizable funky guitar/horn vamp, backed up by throbbing bass and drums and a Fender Rhodes keyboard echoing in the background.

The musicians manipulate the groove soulfully on cuts like "Batween the Sheetz, where they hold the vamp and slowly stir in melodic imprints; this piece features a spicy sax solo from David Caputo. Tight arrangements and infectious beats are abundant here, and on the surface it would seem like the music has little depth. But it offers a surprise with a world beat enthusiasm on "The Hup, which features a catchy South African rhythm and some artful guitar-styled plucking by Mark Hanna. He also provides an odd-metered yet memorable riff on the quirky boogie "Ev'ry Man a King, which concludes with a sweet New Orleans drum-roll shuffle.

The strongest piece, "Mid-February Stress Test, closes out the recording with heavy group interaction anchored by drummer Matthew Tredwell and bassist Justin Kimmel. It would have been nice if they had thrown in a ballad to break up the upbeat tunes, but for all intents and purposes this recording succeeds in delivering just what the doctor ordered for the weekday blues: a good party.