By DAN BILAWSKY
October 6, 2014
Sign in to view read count 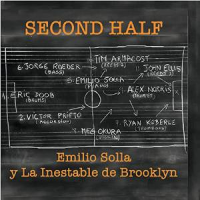 The life-as-football-game metaphor is central to this stunning album from pianist Emilio Solla.

In 2012, Solla had an epiphany. He awoke to the realities of his existence, the finite nature of things, and the passage of time. He realized that he'd already played the first half of this game called life, working his way up and down the field while executing play after play. Now, in working his way into the second half, he's learned to play the game using the hard-earned wisdom gained during the first half to his advantage. And he's worked out some new scenarios in the playbook, too.

Some musicians tend to infuse too much nostalgia into their music as time comes off the clock, but Solla never falls into that trap. Instead, he uses everything at his disposal to make the plays, creating vibrant harmonic tapestries, peppy and playful passages, and beautifully wrought pieces of musical art. He's not afraid to turn reflective on occasion ("Para La Paz"), but he doesn't usually dwell on his thoughts; he prefers to move, in both senses of the word. There's passion at play, rhythmic sway, and a hearty heart beating around Second Half.

Solla paints his canvases with La Inestable de Brooklyn, a nonet that he built in 2010. Plenty of New York's top-flight players are part of this outfit, and each brings something unique to the table: Accordion whiz Victor Prieto helps Solla connect the sonic dots between Spain, New York, and Argentina; violinist Meg Okura brings a spirited elegance to the music; multi-reedists John Ellis and Tim Armacost fill many roles, coloring, riffing, or soloing on different instruments; trumpeter Alex Norris and trombonist Ryan Keberle add depth and complex color to the work; and bassist Jorge Roeder and drummer Eric Doob expertly steer the ship. And while those brief descriptions are completely accurate, they're also very limited. Everybody actually does everything in this band. These nine can simultaneously be seen as utility players and stars, alternately capable of shining like the most precious of stones or blending into the scenery. They can sound like eighteen musicians when needed, but they can also simply vanish, leaving Solla to work in a more intimate space.

Solla opens the album with "Llegara, Llegara, Llegara," a rich and sunny invitation to all ears, but things take a slightly more formal turn with the follow-up—"Chakafrik." From there, Emilio Solla y La Inestable de Brooklyn branches out in multiple directions. There's the calm of "Para La Paz," the complexity of "Suite Piazzollana," and, best of all, an incredibly brilliant reworking of "American Patrol" that bridges the gap between the good old U.S. of A. and South America while giving Keberle the space he deserves.

While returning to the metaphor department and switching sports may deservedly draw ire from some readers, it must be noted that Second Half is a home run. It easily ranks among the best of 2014.