By Hrayr Attarian
November 20, 2018
Sign in to view read count 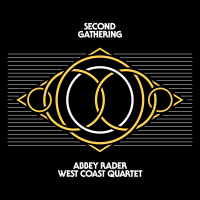 Drummer Abbey Rader is a consummate improviser and an innovative bandleader. His intrepid creativity evolves and transforms with each recording. The 2018 Second Gathering is no exception. On it Rader leads his West Coast Quartet on five spontaneously composed multilayered tracks that bear his indelible mark of cerebral spirituality.

The ambience of "Uncovering the Jewel in the Lotus" is that of an eastern Zen serenity. Bassist Kyle Motl's reverberating strums and Rader's rustling percussion build an angular rhythmic framework. Motl switches to ethereal con-arco refrains. The bounce of his bow against the strings resonates against Rader's galloping and energetic drumbeats. Saxophonist Drew Ceccato makes his soprano twitter in short, restless phrases that contrast with clarinetist Peter Kuhn's long, melancholic tones. Ceccato and Kuhn's exchanges are simultaneously wistfully melodic and delightfully dissonant.

The stimulating thematic cohesiveness of the album is thanks to both Rader's brilliant musicianship and the seamless camaraderie among the four band members. The entirely improvised performance has not a single note out of place even on riotous and up-tempo tunes like "Till Next Time." Rader opens with thunderous polyrhythms and Motl contributes a crisp, eloquent solo. As the woodwinds enter the collective sound becomes even more vibrant and the atmosphere jubilant yet laced with angst. The provocative, concurrent and overlapping individual monologues thrill with their inventiveness and move with their fiery passion.

Once again Rader has produced a work of primal beauty and exalted mysticism. Second Gathering is another superb addition to his oeuvre. Rader chooses his collaborators well as they not only understand but also share his artistic vision. This and his relentless and imaginative inventiveness are the dual driving forces behind his impressive output.

Slidin' in and Out; Uncovering the Jewel in the Lotus; If You Can Light It; Finding the Still Point; Till Next Time.