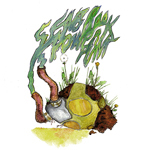 Seabrook Powerplant is the long awaited debut of Brandon Seabrook as an ensemble leader, one of the most impressive young guitarists to arise from the verdant Brooklyn scene. Despite his relatively limited discography, the New England Conservatory graduate has been active since the mid-1990s, as a member of Radical Jewish Culture pioneers Naftule's Dream, the eclectic Beat Circus and more recently, in collaboration with Peter Evans, Jessica Pavone, Jeremy Udden and other like-minded peers.

Splitting his time equally between banjo and guitar, Seabrook is joined by his brother, Jared Seabrook on drums and Tom Blancarte on bass. Eschewing the typical eclecticism of most premiers, Seabrook Powerplant offers a focused statement from a tight-knit trio whose rapport demonstrates the finely tuned interplay of a veteran ensemble, convincingly knitting together disparate strains of Eurasian folk music, punk, metal and the avant-garde.

Equally adept on banjo and its six string cousin, Seabrook is a phenomenal virtuoso and an in-demand sideman, occasionally stealing the spotlight from his employers with his prodigious technique and innovative use of EFX. A singular talent, he pushes the limits of pyrotechnic showmanship beyond convention, into the realm of surreal psychedelia—as revealed in the oblique angles and thorny intervals of "Waltz of the Nuke Workers." In any other context his blistering fretwork on "I Don't Feel So Good" might sound excessive; contrasted against menacingly slow Melvins-inspired sludge metal riffs and his brother's Bonham-esque backbeats, his blinding salvos acquire a dramatic urgency.

Unveiling a fascination with the post-Watergate era, Seabrook's oppressive song titles, like "Ho Chi Minh Trail," "Occupation 1977" and "Doomsday Shroud" lend a visual cue to these strident performances. "Ho Chi Minh Trail" is riot of piercing Eastern tonalities and quicksilver rhythms, while "Occupation 1977" modulates from kaleidoscopic minimalism to a monolithic dirge of Sabbath-inflected intensity. Emblematic of its title, the mordant tone poem "Doomsday Shroud" closes the album with grave resolve.

Although Seabrook Powerplant only scratches the surface of Brandon Seabrook's talents, it is nonetheless a stunning debut—a visceral session from a seasoned trio blazing new paths through the tenuous divide between jazz and rock.