By Edward Blanco
January 8, 2010
Sign in to view read count 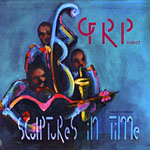 Spanish guitarist Gabriel Riesco leads his GRProject quintet on their second album, Sculptures in Time, presenting a challenging selection of original modern and fusion-like jazz diced with elements of Latin and a splattering of smooth jazz. Billed as a jazz/samba and fusion guitarist, Riesco's guitar style compares quite nicely to Pat Metheny, though their approaches are different. Riesco gleamed his experience with fusion as a member of the international jazz-fusion band Global Grooves, and immersed himself in Latin music when obtaining an education in Miami and later playing in various Latin bands.

The album is a musical tribute to Spanish Basque sculpture Eduardo Chillida, with whom Riesco identifies, comparing Chillida's art work of aesthetic concepts of space and matter to his own compositions, which he considers musical frames in time and vehicles for connecting Chillida's abstract concepts. Whether or not listeners buy into this notion is unimportant; the music is introspective and inviting, and successful in its appeal. Performing with Riesco as part of the GRProject are Israeli-born saxophonist Nir Naaman, pianist Ray Assaf, bassist Chris Smith and drummer Colin Stranahan.

The project's center-piece is the tribute tune "Chillida" which, at nine minutes, offers plenty of space for Riesco and his band mates to demonstrate their individual talents with quality solos, as the music moves through a landscape of upbeat and modern material. "Ainara" and "Todo Claro" are two delicate, soft-textured numbers where the band withdraws into a gentler mode, featuring Riesco's mellow finger-picking string work and Naaman's warm sax lines. Perhaps the album's most ambitious point is the ten-plus minutes "Ol For," a piece colored with the Metheny influence, highlighting Naaman's sax excursions, Stranahan's shifting drum rolls and cymbal splashes, and the guitarist's soothing chord changes.

A highlight of the album is the Brazilian-tinged "Simba's Samba," gyrating with a smooth, percussive Latin rhythm. Naaman takes to the heart here, offering a steamy solo, and then handing the melody off to Riesco for a fine solo of his own, before returning to cap off this excellent number. The music rounds out with the sophisticated "Africa" and an exploration of Riesco's improvisational side. Sculptures in Time may only be Gabriel Riesco's sophomore release, but this exceptional music, normally attributable to a master musical sculpture, reveals an artist on the road to becoming one himself.