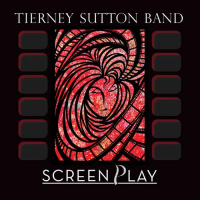 A cinematic sweep has long been present in the music of the Tierney Sutton Band, but never before have the stories been so vivid and the colors as striking. With ScreenPlay this long-running group adopts and adapts material from the silver screen, creating high art that's spellbinding and eminently listenable.

In the past, whether exploring the music of rock icon Sting, remodeling the Great White Way, or placing jazz classics in new light, Sutton and her bandmates have always found a way to pledge allegiance to source material while also showing us how pliable it can be. With these performances, that two-pronged philosophy remains in place. And though it may seem paradoxical, each ideal actually supports the other: Extreme knowledge and respect for the music is precisely what allows this crew to simultaneously take liberties with a song and demonstrate marksman-like aim at its truths.

Opening with "The Windmills Of Your Mind," Sutton's gifts as arranger and vocal hypnotist immediately come to the fore. Floating against fixed time with pianist Christian Jacob as her companion, she introduces the song in absorbing fashion. Then, when things are truly set in motion, the hallmarks of this band's artistry—solidly creative grooves, metric tweaks, harmonic sophistication, wordless allure—are fully illuminated.

In the fourteen songs that follow, there's nothing present to dispel the charms and enchantments given forth on the opener. Whether swinging and flying through "On A Clear Day (You Can See Forever)," inviting guitarist Serge Merlaud into the picture for an open-air "I've Got No Strings," delivering some finger-snapping lightheartedness with "If I Only Had Brain," or meeting 93-year-old guest vocalist Alan Bergman on his classic co-crafted turf with "How Do You Keep The Music Playing?," the band and its leading lady are in prime form. While Sutton, Jacob, bassists Kevin Axt and Trey Henry, and drummer Ray Brinker deal with material spanning eight decades, it all sounds thoroughly modern in their collective hands.