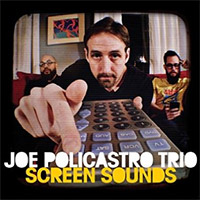 There are always new wrinkles to be found in the familiar. That's a philosophical stance that seems to serve the Joe Policastro Trio well. This Chicago-based outfit's debut album—West Side Story Suite (Self Produced, 2013)—served as a distillation and expansion on Bernstein's masterpiece, turning Broadway on its head; Pops! (Self Produced, 2016) referenced both the venue that served as the band's birthplace and the titular musical strain, presenting newly drafted takes on the music of The Pixies, Neil Young, Stevie Wonder, Prince, and other popular culture figures; and this third platter tackles television and film music, putting alternately gritty and focused touches on songs we've come to love.

While Ennio Morricone's Spaghetti Western music didn't make the cut for this project, Policastro's crew seems to channel that composer's dark urgency in numerous places. Dave Miller's razor-edge guitar, both cutting and raw in certain spaces, speaks directly to what Morricone always managed to transmit. Even those with only a passing knowledge of that legend's work can manage to hear the link in this outfit's takes on pieces like Masaru Sato's "Yojimbo (Main Theme)" and "Nadia's Theme (Theme From "Young And The Restless")." Elsewhere there's no obvious connection, inadvertent or otherwise, to any particular figure or sound beyond each composition's true origins. The Harry Nilsson-associated "Everybody's Talkin'" moves along with pass-the-baton melodicism between Policastro and Miller, "Cool Hand Luke (Main Theme)" takes on a swinging stride, and "Angela (Theme From "Taxi")" juxtaposes Miller's classy and slick directness against drummer Mikel Avery's salt-of-the-Earth grooving.

The song that gives off the most favorable impression is one of the lesser-known numbers—"Summer Kisses, Winter Tears." It's a piece that once fell from Elvis' lips and later had its day on the soundtrack to Wim Wenders' Until The End Of The World (Warner Bros., 1991). Here, it comes off like the background of a motile Tom Waits narrative drifting on the Hawaiian breeze. Miller, once again, steals the show, but this time with clean and fluid lines. Certain numbers here sag under the weight of their familiarity—an Americana-country walk through Leonard Cohen's "Hallelujah" adds little to the album, Policastro's arco work sells "The Godfather (Main Title And Love Theme)" short—but the majority of the material is pleasing and/or different enough to hold up. Policastro and company have found their niche by tapping into different breeds of treasured songs. It'll be more than interesting to see where the fourth go-round takes them.