Billy Jenkins With The Voice of God Collective: Scratches Of Spain 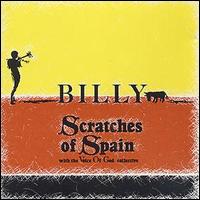 To mark the thirtieth anniversary of its original release on vinyl (it was later released on CD) this download-only version is a welcome reissue from the canon of Billy Jenkins recordings. It's a shame that it's only available as a download since it certainly merits a physical reissue. But a digital presence is certainly better than none for this long out of print album. Jenkins is not performing live these days but perhaps he will be persuaded to make a comeback because his gigs were always unfailingly brilliant. However, Jenkins has not been idle in the recent past, having released two excellent digital-only solo guitar albums, 2014's The Semi-Detached Suburban Home (Music For Low Strung Guitar) and 2015's Death, Ritual & Resonation: Eight Improvised Studies On Low Strung Guitar.

Scratches Of Spain kicks off with typically robust vocals from former Loose Tubes trombonist Ashley Slater on the funky "Monkey Men." The eighteen piece ensemble is largely populated by ex-Tubers too including the irrepressible Django Bates.

An appropriately disturbing sax-led vamp presides over "Cuttlefish," infused with a plethora of percussion, it begins to resemble a kookier version of tracks from On The Corner but with some jokey organ quotes such as "I Do Like To Be Beside The Seaside."

However, the subtle military marching snare and wistful clarinet of "Barcelona" indicate that the album is indeed something of a paean to Miles Davis's album, albeit with a hilarious Shadows guitar interjection. But this is, as Jenkins constantly reminds the listener, Spaz (Spaß or Spass), which translates as joke music, played with a least as much panache as that other "comedy" band, The Mothers Of Invention. Compare and contrast Jenkins's ensemble with the Mothers on "Benidorm Motorway Services."

The infectious percussion-rich dance music of "Bilbao/St Columbus Day" juxtaposes dramatically with the lugubriosity of "Cooking Oil," the cello and vibes entwined in a mesmerizingly morose duet. The clownish mood rapidly returns with the final, jaunty "McDonalds" imparting a Dixieland jazz band feel to the proceedings.

All joking aside, any Billy Jenkins releases or reissues should be considered a serious event and this album is no exception, festooned throughout with prodigious talent and idiosyncratically delightful tunes.