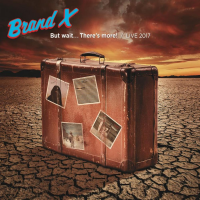 But Wait... There's More!, the new live album by Brand X captures a complete performance of the classic Anglo- American prog-jazz-fusion band (can we fit a few more hyphens in here?) from their recent, eagerly anticipated, recent tour. Recorded in January at the Sellersville Theater, it is a blistering, high energy set, reexploring material from their first two studio albums, 1976's Unorthodox Behaviour and 1977's Moroccan Roll, as well material from their 1977 live album, Livestock.

Recorded at a single show, the recording has an authentic, energized feel. It's a solid "warts and all" document of a band really gelling after a hiatus of over two decades. Founding members, guitarist John Goodsall and bassist Percy Jones, along with veteran Livestock era drummer, Kenwood Dennard, are joined by new members Chris Clark on keyboards and Scott Weinberger on percussion. The new line-up brings new ideas and vigor to the material, with the old members exploring new sounds and the new members bringing their own musical identities into the mix.

Goodsall's guitar often has a nastier, snarling tone only hinted at on the band's old albums, unleashing solos that are cutting and angular. Jones in fine form, with his deep, swirling magma bass showcased on "Born Ugly" and "Hate Zone," while his solo "Magic Mist" highlights a more lyrical, cosmically mysterious sound.

The sheer power of Kenwood Dennard's drumming is very much at the forefront here, injecting the material with an unrelenting funkiness. Scott Weinberger does a fine job finding spaces within the groove for color and emphasis. The rhythmic approach of the two constantly shifts in its relationship and dynamics, vacillating between complimentary, rhythmic discussions and full-out unison freight train assaults.

Clark's keyboard work is more staid, his approach more cerebral. He executes his parts expertly and constructs his solos for maximum chromatic effect. His solos often seem to deliberately eschew any notes that could possibly be expected in a given moment. The results are often dizzyingly satisfying. In addition, his solo piano version of ..."Maybe I'll Lend You Mine After All" is masterful. His spare and lovely, but crisp and sharply attacked playing (evoking Chick Corea, to no small extent) makes the piece worth the price of admission alone.

But Wait... There's More! is a fine document of a band reemerging and reasserting itself, but more, it's a powerful and engaging album in its own right. In spite of the fact that nearly all of the music was composed decades ago, the album features some incredibly strong performances and a level of intensity that makes this recording stand out based on its own merits, making it worthy addition to the Brand X catalog.

Intro; Nightmare Patrol; Euthanasia Waltz; Born Ugly; Isis Mourning; Nuclear Burn; Magic Mist; Why Should I Lend You Mine…; …Maybe I'll Lend You Mine After All; Hate Zone; And So to F; Malaga Virgen