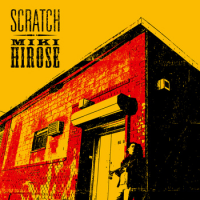 Presenting a superb list of new originals, New York-based trumpeter Miki Hirose delivers an impressive second effort on Scratch providing a challenging yet, very accessible musical statement that reflects in some part, his affinity for the Latin genre. Originally from Kobe, Japan, Hirose came to New York City in 2003 and has since become an important part of its vibrant jazz scene performing with many luminaries among them, Benny Golson, Dr. Lonnie Smith , Frank Wess and many more. Hirose may have drawn his inspiration for the Latin sound from his experiences with La Excelencia, better known as 'The New Generation of Salsa Dura' where he immersed himself in the gyrating rhythms of Salsa as well as being a part of the Pedro Giraudo Jazz Orchestra, where his exposure to Argentinean Folk, the Tango and other South American grooves, may have left a strong impression.

An interesting note, the ambitious beginning title track—though containing an element of the style, as solo statements from Mauricio Herrera's congas and tenor saxophonist Xavier Perez aptly confirms—the music is not overtly Latin despite its power-packed punch as an opening statement. Scottish bassist Aidan O'Donnell introduces the hard-driving "Run & Gun," a primarily straight ahead piece void of the main theme but none the less, outstanding to the core. Hirose on flugelhorn comes to the fore on the soft and definitely, Latin-colored jazz bolero "Reasons" featuring gorgeous warm-toned lyrical playing from Perez where his tenor serves more than an accompaniment to the leader. This piece is certainly an album highlight helping to define the recording.

The excitement of hard Latin rhythms is revealed on the spicy "61-17" where the horns and the percussive sections play prominent roles as would be expected in such a hot number. The beat continues with drummer Jerome Jennings opening the swinging vibes of "In Need" followed by pianist Toru Dodo's more than appreciable performance on the keys. Hirose of course, is not left behind here evidenced by some more solo space. While the trumpeter prefers to showcase his original compositions for this album, he chose to include Duke Ellington's classic "In A Sentimental Mood" delivering a sensitive rendition that stays true to the original melody and provides a center stage for the trumpeter's forceful performance.

Hirose's sextet closes the album with "Brand New Year," a delicious modern straight jazz romp featuring a terrific drum solo at the end departing once again from the main Latin theme of the recording. Digging deeper beneath the surface of Scratch, one will find a world-class trumpeter who has indeed arrived as a player and composer, served quite well by the engaging and compelling repertoire contained in this audacious outing.