Toru Dodo, born in Tokyo , started playing classical piano at age 4. After he entered the Meiji University in Tokyo , he discovered Jazz music.

(His major was Economics.) He started gigging in Tokyo area. After he graduated, he went to Boston to study at the Berklee College of Music, '95 Summer.

He released 3 of his leader album “DODO” (2002) “116 West 238 St.” (2004) (featuring Reuben Rogers on bass and John Lamkin on drums) and “DODO 3” (2006) (featuring Joseph Lepore on bass and Rodney Green on drums) from Japanese label , Jazz City Spirits／Muzak, all produced by a legendary guitarist, Yosiaki Masuo.

Musicians who he worked with as a side man are Kenny Garrett, Benny Golson, Curtis Fuller, Ruth Brown, Terumasa Hino just to name a few.

He's been hosting Sunday Jam Session at the Cleopatra's Needle, a jazz club on 92nd and Broadway in NYC since 2002.

“Toru Dodo's name may not be at the top of people's lists of riveting jazz pianists-yet- but with recordings like Dodo 3, such recognition could come soon enough.” —Brian Lonergan , All About Jazz (June 2006) 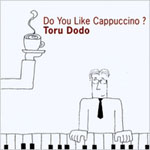 All About Jazz musician pages are maintained by musicians, publicists and trusted members like you. Interested? Tell us why you would like to improve the Lou Reed musician page.