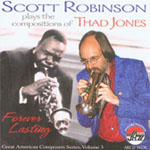 Thad Jones was best known as an outstanding composer/arranger, in addition to his abilities as a trumpeter and bandleader (various small groups, the Thad Jones/Mel Lewis Orchestra and the Count Basie Orchestra, the latter following Basie's Death). Scott Robinson has long been an admirer of Jones and he may be one of the first to devote an entire CD to the late composer's works, which includes fourteen songs, several of which have been rarely recorded. This release compiles selections from four different recording sessions over a thirteen-year period, utilizing different combinations of rhythm sections. One is so used to seeing Scott Robinson playing such a wide variety of saxophones that it is easy to forget that he also plays other instruments, including echo cornet, flugelhorn, French horn, C-flute and E flat-soprano flute, plus alto clarinet, all heard on this release.

Robinson's session with organist Mike LeDonne produces some of the most unusual sounds of the date. On several tracks, he plays bass sax, which produces surprising results in the lush ballad "To You," the peppy "Three and One" and the greasy "TNA Blues"; Robinson makes the ungainly horn sound very melodic, sounding inspired by the late baritone saxophonist Pepper Adams (also a Jones/Lewis alum). For the gorgeous ballad "A Child is Born" (easily one of Jones' best tunes), Robinson creatively combines theremin as the lead voice with overdubbed alto clarinet to construct a unique treatment of this jazz standard, assisted by pianist Richard Wyands. Thad Jones' elder brother Hank makes a special appearance in a warm rendition of "All My Yesterdays" with Robinson playing a rich vibrato-filled tenor sax à la Ben Webster. This is no mere novelty release, but a thoughtful series of arrangements in honor of one of the best jazz composers of the 20th century.

Quietude; To You; Interloper; Don