BY GLENN ASTARITA
January 30, 2018
Sign in to view read count 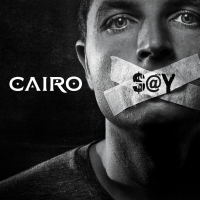 Keyboardist/vocalist Rob Cottingham is the founder of the highly regarded UK-based progressive rock outfit, Touchstone. Yet Cairo is a new venture with Lisa Driscoll sharing vocal duties for an album that exceeds expectations due to the largely memorable works that bridge gorgeous and wistful harmonies with the musicians' impressive technical faculties. The band's resonating soundstage is the output of interstellar mini-motifs, theatric intervals, and pummeling grooves, all executed with clarity of thought and thematic incursions that purvey a sense of urgency, occasionally tempered with dreamy escapism.

Cottingham often leads his associates through sinewy force fields, enduring melodies and knotty unison runs, as each piece stands on its own. They radiate a big sound, sparkled by the leader's polytonal keys atop the dynamic rhythms and regal choruses, merging delicate vocal refrains with hummable hooks, James Hards' stinging guitar licks and more.

The musicians come at you from all angles, whether its straight-ahead rock with Cottingham's peppery keys and prolific synth lines on "Say," or via ambient-electronic patterns with digitally treated voicings and punchy accents, tinted with prog-metal overtures during "Nothing to Prove." However, the band mixes it up with imaginative tonal shadings, vitalizing solo spots and eloquent narratives. Indeed, the magnetic qualities of this program sustain a high level of interest and delight.

Abetted by a strong commitment to harmonic phrasings, the ensemble instills warmly crafted textures that contrast the storming prog movements, along with Cottingham and Driscoll's heavenly vocal spots, glistening hues, power-packed jaunts and expanding soundscapes that zoom straight to the heart. No doubt, Say is a major milestone and a must listen for most if not all prog rock aficionados. No doubt, it's a top-shelf product that imparts a lasting impression well beyond the norm.

Shadows Return Prologue; Shadow’s Return; Wiped Out; Say; Nothing To Prove; Nothing To Prove Reprise; Katrina; Searching; Random Acts OF Kindness Part 1; Back From The Wilderness; Dancing the Gossamer Thread; Katrina (Breath Mix).