BY BRIAN SOERGEL
February 14, 2004
Sign in to view read count 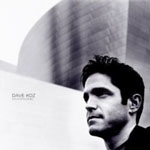 Dave Koz has one of the highest profiles in smooth jazz, thanks to his syndicated Dave Koz Radio Show and a morning show in Los Angeles. He also finds time for special tours, like one you may be catching this Christmas. He's guest-starred on numerous pop and smooth jazz CDs. So it's no surprise that it's been four years since his sublime, hit-happy The Dance, his last CD of non-holiday tunes. (He also released Golden Slumbers, a recording of lullabies.)

Fans have been begging for new material, and Saxophonic delivers big time as a "concept" CD that is broken into three "acts"—funky, mid-tempo and experimental. That's only partly true, as there is a ballad in the funk section and some pretty standard Dave Koz stuff in the experimental section. No matter. Pay no attention to the "Acts." Overall, it's Koz's best yet—melodic, radio-friendly, trippy, a little different. Koz may surprise some of his longtime fans, but it will be a good surprise—that's what make it his crowning work so far. Just when you assume a musician is going to crank out another by-the-numbers CD...

Koz's tenor has never sounded so robust—not a whole lot of Kenny G swirls going on here. The first single, "Honey-dipped," and "All I See Is You" are slices of breathy sax and funk a la Euge Groove. Koz loves wordless vocals and repeated choruses, which he has on two standouts: "Love Changes Everything," with Brian McKnight, and "Undeniable," with Bobby Caldwell barely registering a presence, which is kinda weird—a good weird, for it's a Koz song, not a Caldwell vocal. Koz does dip into the soprano, with great effect, in the lush 'Just to Be Next to You,' the toe-tappin' and irresistible 'Let It Free' and 'A View From Above,' with guitarist Marc Antoine.

The 'experimental' songs are groovy. 'Saxophonic (Come on Up)' has wonderfully weird loops, deep funk and some jazzy horn work. It's like ten songs in one. 'Sound of the Underground' features a Parisian metro shuffle a la Philippe Saisse (actually, it's a sample from a bebop classic), and Chris Botti adds trumpet. 'Only Tomorrow Knows' has computer-synthed vocals a la Cher, and ya gotta love the whistling.

Visit Dave Koz and RadioKoz.com , his Internet radio site, on the web.

Honey-dipped; Love Changes Everything; All I See Is You; Just To Be Next to You; Let it Free; Undeniable; Saxophonic (Come On Up); Definition of Beautiful; Sound of the Underground; Only Tomorrow Knows; I Believe; A View From Above; One Last Thing.