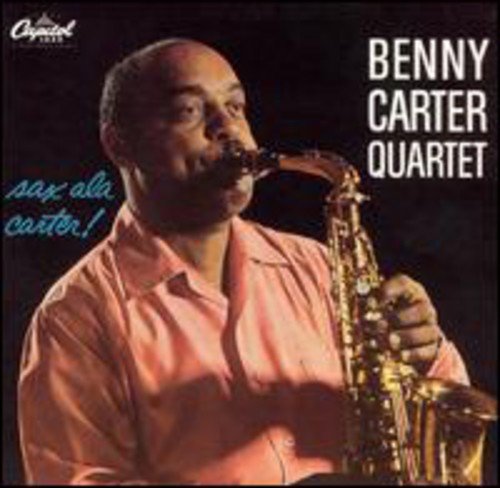 This album represents just a small facet of Benny Carter's musical activity during the '50s and '60s, a good deal of which was occupied by writing and arranging in Hollywood. Nevertheless, Carter always seemed to be involved in a number of projects, this 1960 release being just one.

Accompanied by a first-rate trio of Jimmy Rowles (piano), Leroy Vinnegar (bass) and Mel Lewis (drums), the "King" tackled a collection of fairly familiar tunes on a then-United Artists album in 1960. As biographer and annotator Ed Berger points out, while the album was aimed at a broader listening audience than strictly jazz fans, Carter did not simplify his solos to suit the hoi polloi.

Brevity being the soul of wit, nearly all of the selections weigh in at about three minutes apiece, yet Carter and company manage to cram a lot of playing into each cut. Even when stating the various melodies, whether on "All or Nothing at All," "Ghost of a Chance," or a surprisingly up-tempo "For All We Know," Carter shows you can wring a lot out of a tune before getting to a formal solo. Rowles is, at times, downright ebullient, in both his accompaniment and his solos, similarly cramming a lot of ideas into limited space without sounding forced or contrived.

The backing of the trio is typically rock-solid for a Carter small group, with Vinnegar and Lewis providing the leader with the strong support he liked. Lewis plays with a forcefulness that he displayed with larger ensembles of the time, such as Terry Gibbs' big band, a style that mellowed after he returned East and started his own band with Thad Jones.

The album contains two interesting Carter footnotes, his overdubbed saxophone stating the melody on "Friendly Islands" and "Moon of Manakoora," and one real gem—his soprano saxophone playing on "Ennui." Given how he sounds on that tune, it's a shame he never attempted to do an entire album on the instrument.