By MARK REDLEFSEN
December 14, 2010
Sign in to view read count 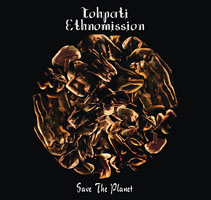 In the world of guitar-driven jazz fusion, laced with world music, it has typically been a westerner who learns and ensconces themselves in another ethnic culture; processing, packaging, and exporting a digestible product back for listeners to experience. The absorption of jazz, rock, and fusion in Indonesia has produced some exciting results over the years, with original groups such as SimakDialog, and its virtuoso guitarist, Tohpati. His solo group, Ethnomission, puts jazz fusion and world music on notice with the stimulating Save The Planet. The authentic, homegrown sound that spans eleven compositions, with indigenous song titles, was captured and recorded entirely in Jakarta, Indonesia.

Tohpati's guitar sounds here are significantly different than with SimakDialog, where keyboardist/leader Riza Arshad is a noticeable and ever-present factor. Instead, electric and midi synth guitar rule the day, answered by the Sundanese flute and soundscapes of Diki Svwajiki. Indonesian percussionist Engang Ramdam, also from SimakDialog, joins Tohpati, while Demas Narawangsa adds more of the same and augments the sound with conventional drumming. The music shifts and pulls in an intricate tug of war between tightly played riffs and a wide array of drums and percussion. Indira Hardjodikoro's bass guitar balances out the tension, hitting a Stanley Clarke moment or two on "Inspirasi Baru," but the deep, more Tony Levin-like punch of his sound is felt throughout most of the recording.

Different thoughts as to who the Stratocaster-wielding Tohpati sounds like on different songs are inevitable. "Drama" and "Ethnofunk" draw John McLaughlin and Robert Fripp comparisons, while "Pesta Rakyat" has more of the Americana tone of Steve Morse or Nels Cline. Topathi's overdubbing on the closing "Amarah" reflects what it might sound like if Terje Rypdal was soloing over Metallica guitarist Kirk Hammett's staccato riffs. Tohpati does not settle into any one template throughout the CD, and keeps the group involved at every turn, delivering joyous kinetic music. Save the Planet, as well as Tohpati's work with SimakDialog, is well worth checking out.