By JOHN KELMAN
October 1, 2009
Sign in to view read count 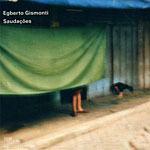 It's been over a decade since Egberto Gismonti released the ambitiously symphonic Meeting Point (ECM, 1997). Saudações continues to expand this Brazilian composer/pianist/guitarist's ouevre, with one disc devoted to a sprawling, seven-part work for Camerata Romeu, a 16-piece Cuban string ensemble; and the second an intimate series of guitar duets and solos, featuring Gismonti and his son, Alexandre. Like the dual-context (but differently configured) Sanfona (ECM, 1981) in its demonstratatin of two very different sides to Gismonti, Saudações remains an even more diverse effort.

Gismonti played piano on Meeting Point which, in addition to new compositions written specifically for the orchestra, delivered reworks of classic tunes, in particular the joyful "Frevo," one of Gismonti's most often-recorded songs. Here, he's in the sole role of composer, and there are, indeed, references to past works—most notably the suite's closer, where Gismonti expands on his poignant "Palhaço na Caravela." Still, as an homage to Brazil's cultural, historical, and musical melting pot, even his own tunes become subsumed in the more expansive references of the discs's title—Sertões Veredas - tributo à miscigenação ("tribute to miscegenation"). As Gismonti's career attests, the signposts are many, ranging from the contrapuntal classicism of the second movement to the rhythmic aspects of the third, which also visits greater abstraction in its middle section. From French impressionism to Brazilian modernism, Sertões Veredas is a more successful orchestral effort than Meeting Point; despite its inherent diversity, a more unified sense of purpose drives this compelling 75-minute work.

A unique guitarist, whose unbridled stylistic invention was a significant influence on Ralph Towner in the Oregon co-founder's early days, Saudações second disc, Duetos de Violões, is a welcome return to performance, following the 1989 duet with bassist Charlie Haden, released on In Montreal (ECM, 2001). His last group album was the somewhat overlooked ZigZag (ECM, 1996), the title track from which is reworked here into a more hypnotic duet that reveals far more intimate details.

The two Gismontis also revisit the darker, yet more propulsive "Mestiço & Cabocio," also from ZigZag, as well as two songs from the elder Gismonti's solo guitar set, Dança dos Escravos (ECM, 1989). The shorter version of its fiery title track possesses a kind of conversational freedom distanced from the solitary improvisational élan of the longer original, while the equally intense but considerably shorter "Lundú," opens the disc with playful interaction that sets the tone for the balance of this 70-minute set.

Of the remaining tunes, one is a solo by Egberto—the virtuosic title track—and two are solos from Alexandre, most notably his lyrical take of "Palhaço" which links this fine recital to its orchestral sister. The contrasting styles of this more polished son and rawer, more elemental father make for a surprisingly compatible pairing on Saudações, a welcome return for one of Brazil's most distinct and innovative voices.