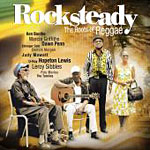 The lovingly conceived, brilliantly executed, multi-platform Rocksteady: The Roots Of Reggae aims to achieve the same sort of museum piece-to-modernity transformation for Jamaican rocksteady that Buena Vista Social Club (World Circuit, 1996) created for Cuban music of an earlier era. As with Buena Vista, there's a CD, a movie and a package tour. The CD features eight surviving rocksteady vocal stars of the late 1960s revoicing some of their biggest hits of the era (or those of departed contemporaries), accompanied by a brilliantly well-qualified and still kicking studio band made up of fellow survivors, many of whom played on the original 7" singles. As an added treat, the inimitable and enduring DJ and toaster (rapper/poet) U-Roy, who honed his art working with Jamaica's mobile "sound systems" during the rocksteady years, voices one track, "Stop That Train."

The authentic "I was there" ethos extends to the studio team. The arranger is the legendary guitarist and bandleader Lyn Taitt, the bandleader is the guitarist Ernest Ranglin (who took on the role following the hospitalization of Taitt prior to the recording sessions), and the engineer is the practically peerless Errol Brown, producer Duke Reid's right hand man at his iconic Treasure Isle studios in the 1960s.

The assembled singers and musicians, most of them now of pensionable age, are still vibrant and affective; the singers, their voices cured and matured over the past 30 years, are perhaps even more enjoyable this time around. The music itself is, of course, pure pleasure. Rocksteady—the transitional Jamaican style between mid 1960s ska and early 1970s reggae—was a slow burning orgasm of three part harmonies, irresistibly catchy tunes, deft picking guitars and jazz-informed horn arrangements. The tempos were slower than ska's but faster than reggae's, and the rhythms lively but sensuous: rocksteady was intended for couples to dance to. It's a soulful, mellifluous mixture and one that can still transport the listener three decades later.

The tunes are classics of the genre. Some, like the bittersweet "The Tide Is High," originally a hit for the Paragons and later given international currency by Blondie, the magnificently moody "You Don't Love Me (No No No)," a 1967 hit for Dawn Penn, who sings it again here, and much covered internationally, and the evergreens "Stop That Train," "Rivers Of Babylon" and "Shanty Town (007)" are known beyond the rocksteady audience. Others have been less widely celebrated, but are just as delightful. The album closes with "Bog Walk," the sole instrumental, credited here to Lynn Taitt.

While nothing could ever quite replace the original makeshift magic of the first-time recordings of these tunes, Rocksteady: The Roots Of Reggae gets surprisingly close. A glorious rewind down memory lane.