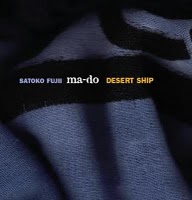 Pianist Satoko Fujii's music on Desert Ship, for the quartet Ma-Do, sits in a phantasmagorical realm that is located artistically somewhere between composer Gustav Holst's Planets and film director Stanley Kubrick's 2001: A Space Odyssey. The sojourn begins in a down to earth manner, with a distant sounding melody that invites, first bass and drums, and then the airy trumpet of Fujii's husband, Natsuki Tamura, to set a course for an interior world where the ever moving and elastic mind meets the equally wondrous vision of the eye of the soul. Fujii's soul that is, born of a restless spirit and able to facilitate a degree of creativity in her art that is almost beyond belief.

Fujii is able to bring together music that dwells in disparate palettes of color and wide ranging timbres, and meld it all into a magnificent whole that is simply breathtaking. As if wielding an explorer's machete and stout stick, she guides her music (and her musical cohorts) by cutting wide swathes of sound that she produces with ingenious manipulation of the piano strings and mallets, keys and pedals. Her touch is like Glenn Gould's from another era. Her fingers dart and flutter across the keys, striking them with varied pressure to produce a wondrous multitude of sounds—soft and loud—and sustained notes that echo and eventually seduce the other instruments to join in the feast of sound that accrues when it is all sung and done.

Far from obviously, Fujii's journey begins in Egypt. The quarter notes that describe the vessel that takes the music there are exquisitely enunciated by Tamura's trumpet and even more beautifully by bassist Norikatsu Koreyasu's shimmering pizzicato and arco con brio meandering, before fingers fly fleetingly across his bass. Thus the "Nile River" is negotiated with maddening ululations and the "Ripple Mark" is navigated with the wail of trumpet and the dark intertwining of bass and the arrhythmia of rolling tom-tom, punctuated by the splashes and twittering of cymbals as they meet the broad and intriguing harmonies created by Fujii.

Who would have thought that "Sunset in the Desert" could be so violent but Fujii, who reads into the sight colors that refuse to fade? The brilliance of the scene is smartly depicted by the slashing motion of Koreyasu's bow on the strings of his bass, sometimes with tremulous effects as the bow skitters across the strings. Akira Horikoshi's constant chattering on the snare, with loud slashes on cymbals, finally calls Tamura and Fujii to fade out with the setting sun. "Pluto" comes alive with a persistent circular piano figure that first draws in the bass and then, with a vortex-like inevitability, pulls drums and trumpet into its orbit.

On "While You Were Dreaming," Fujii takes a deep and trembling dive into the world of dreams. Her journey here is what best describes the phantasmagorical theme of this album. The disturbing rhythm hammered out by Horikoshi, egged on by the wild howl of Tamura's trumpet and Fujii's own urgent harmonics, plays a big part in the disturbing vision of a shattered world that exists between waking and dreaming. "Capillaries" is a pulsating track where Fujii once again drives her quartet into a burgeoning bubble of sound that appears to swell furiously in the inner recesses of the mind. Things finally cool off in "Vapour Trail," a track that burns like a cold blue flame. The music begins as it is meant to, hesitantly, but then accelerates gently with Fujii playing a wistful melody that takes the album home.

The most gripping aspect of Desert Ship is its unconventional use of meter. It is this characteristic, combined with its mystical depths, that forces the comparison with Holst's work. Satoko Fujii might not even be enthralled with Holst's music, but this album certainly pays oblique tribute to his gigantic endeavour, by recognizing the enormity of entering a realm where the subconscious meets the imagined, colliding in such a way as to produce music of epic proportions.