BY DAN MCCLENAGHAN
December 2, 2008
Sign in to view read count 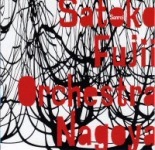 Satoko Fujii has a rock and roll soul and heart, judging from the opening cut on Sanrei, by her Orchestra Nagoya. The tune thumps and slashes to life on a bass/drums/guitar intro that sounds like Deep Purple searching for the groove on "Kentucky Woman," an early burst (1968) in the heavy metal mode.

The Japanese-born Fujii, a beyond category artist, is usually considered an avant-garde jazzer. But her sonic artistry is informed by just about any type of music and sound imaginable. She works in numerous ensemble configurations, small and large, and leads four separate big bands: New York, Tokyo, Kobe and Nagoya.

As with virtually all of her recordings, the music on Sanrei is an expect-the-unexpected affair, with rock riffs and brassy big band harmonies, aural riots of fist fighting horns and histrionic group scatting (nobody ever said that the members of a big band can't set the instrument aside for an interlude and use the voice) that sounds like some sort of manic mass religious ecstasy, in addition to searing sax solos in front of seismic rock and roll type beats in "Blueprint."

And then there's a spare, lilting, Eastern-sounding intro to "Koda Star," with unidentified band member chanting like a crazed monk before the tune segues into a churning instrumental, trombone heavy rant in front of flailing drums.

The title tunes opens with a trudging rhythm, Yasuhiro Usui's twanging guitar weaving in and out of a dark sea of unison horns before it slashes into some metallic chords. The mood is ominous, on edge as a sax wails in.

Satoko Fujii—prolific always—has released eleven CDs in 2008. Her output this year is, in part, a celebration of her fiftieth year. Sanrei is an excellent, high-spirited, rambunctious addition to her huge discography.