By ERNEST BARTELDES
November 3, 2014
Sign in to view read count 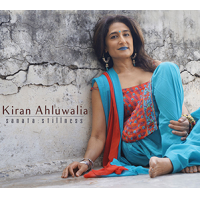 On this inventive album, Canadian vocalist Kiran Ahluwalia brings forth a different approach to Indian music. While the tablas, percussion and the characteristic singing are all present, those are the only Eastern elements you hear. Backing her are rock-tinged electric guitars and an accordion.

This is clearly not an attempt to "Westernize" the music but it is instead a fresh take. The album kicks off with "Hayat," a lively number with unison backing vocals that is followed by the up-tempo "Jaane Na," a tune that showcases a dexterous guitar solo from Rez Abbasi and fascinating accordion grooves from Kiran Thakar.

The North African-inspired "Jhoom" features Abbasi's guitar wandering around the melody, sometimes following Ahluwalia's vocal and when not doing that, the instrument plays a backbeat against the tune's rhythm. Nittin Mitta performs an inspiring tabla solo while the other instruments move to the background. "Qaza" has the feel of a folk ballad thanks to Abasi's strummed acoustic guitar and a more subdued delivery.

Ahluwalia has great vocal confidence, singing with great feeling throughout, especially during wordless vocals. Also quite intriguing is "Lament," a tune with a mysterious tone thanks to its carefully layered keyboards and guitar/bass arrangement.