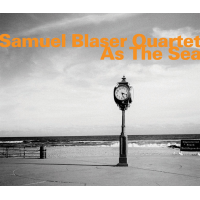 Since bursting on the the international jazz scene in the mid-2000s, Swiss trombonist Samuel Blaser has established himself as one of his instrument's foremost practitioners. His playing combines the precision and detail of a top-flight classical instrumentalist with the unfettered, emotionally direct and rhythmically rich approach that characterizes the best jazz players. Blaser—still in his early 30s— has also forged a reputation as a bandleader and composer par excellence. Presently, he leads four different bands, and occupies the trombone chair in groups led by saxophonist Peter van Huffel, clarinetist Francois Houle and percussionist Pierre Favre. As The Sea features Blaser's longest-lived quartet, with guitarist Marc Ducret, bassist Banz Oester, and drummer Gerald Cleaver. Ducret and Cleaver both have strong musical connnections with saxophonist Tim Berne, who seems to be somewhat of a musical kindred spirit. Like Berne, Blaser writes rambling compositions that not only blur the lines between composition and improvisation; they offer case studies as to how composition can relate to improvisation, and vice versa. By necessity, Blaser's pieces—like Berne's—get drawn out well beyond the 10 minute mark, with dramatic changes occurring mid-stream.

As The Sea opens with the set's most abstract music. Ducret's palm-muted, insectoid guitar creeps all over Oester's nervous, finger- tapping bass. Blaser enters circumspectly, tiptoeing around the periphery. Cleaver, by contrast, dives right in with sizzling cymbals and rattling metals as the tension builds. The piece's melancholic melody oozes out of this seething mass of sound; almost imperceptibly at first, and Ducret takes a pointillistic solo over the rhythm section's aquatic rubato. By the time Blaser steps up for his own solo, Cleaver and Oester have established a loping pulse which, in turn, changes the nature of the melody as it reappears. The second time through, it seems sunnier, almost jaunty.

The second section couldn't be more different. Blaser's jabbing, feinting melody unspools over a slyly funky rhythm. Ducret's solo sets the stage for Blaser's which climaxes in a brief, nervy duet with Cleaver. Unexpected rhythmic modulations change the course of Blaser's and Ducret's improvisations. Cleaver's own densely polyrhythmic solo is somewhat reminiscent of Paul Motian's work with Keith Jarrett; there's a palpable feeling of impending chaos, but Cleaver never quite lets go of the rhythmic thread. "Part 111" transitions with an inventive solo from Oester that cuts and pastes free jazz with incredibly precise, almost classical-sounding snippets. Ducret and Blaser take the pensive melody as a duet, and then repeat it over crashing cymbals and rumbling bass. Cleaver intercedes with a swirling, rockin' John Bonham-esque 4/4 rhythm as Ducret and Blaser extend the melody out further and further. The compositional component of "Part 1V" is a labyrinthine foray that alternates brief tutti sections with be-boppy phrases that have a cheerful, Ornette Coleman-ish sensibility. Blaser's solo here is first-rate; articulate, swinging, and throwing off Albert Mangelsdorff-inspired multiphonics at will. Ducret's distorted, fiery soloing here provides some of the albums most intense moments as Cleaver and Oester eagerly rise to the challenge.

It is hard to convey the depth and profundity of Samuel Blaser's As The Sea in a simple CD review. One of the most necessary jazz albums of the year, As The Sea is the sound of four virtuosos interacting on the highest level, completely unbound by style, genre, and other superfluous concerns.