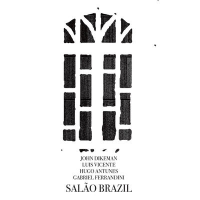 Amsterdam-domiciled American saxophonist John Dikeman and Portuguese trumpeter Luis Vicente have become regular collaborators, although the only prior evidence on disc is their first meeting in Twenty One 4tet's Live At Zaal 100 (Not Two, 2016). For the limited edition LP Salão Brazil they have enlisted two of the brassman's countrymen in Belgian-based bassist Hugo Antunes (who may be familiar from some outstanding alliances with trumpeter Nate Wooley) and in demand drummer Gabriel Ferrandini from the RED Trio and Rodrigo Amado's Motion Trio. They combine in a responsive outfit recorded live in Coimbra, Portugal during a short tour in January 2016.

Already it feels as if this foursome has forged a group identity in which everyone likes to play, but at the same time listen carefully and remain closely attuned to each other's inclinations. It's easy to see why the two hornmen have established such a strong rapport. The exchanges between Dikeman and Vicente lie at the heart of the discourse, although aided in that by freewheeling sonic carpet laid down by Antunes' nimble, tunefully bent notes and Ferrandini's cavalcade of timbre. The darting precision of Vicente's pinched sound, especially with his bell muted, forms a winning contrast to Dikeman's broad Albert Ayler-inspired impasto.

Each side long cut explores a different mood. At the outset "One For Adam" seems as if they are feeling their way, but gathers pace with quicksilver give and take between the horns as Ferrandini veers between rush and halt. A sudden switch finds Antunes' upper register plucking vying with Vicente's snuffling trumpet, until an eventual return to the initial rapid fire fractious opposition.

"Hob And Nob" begins more atmospherically with keypad flutters, cymbal scrapes and a quiet trumpet drone, but Antunes' restless bowing dominates thereafter. Space opens up for more individual or paired expression, with a notable a cappella horn duet. Based on such free flowing interplay from four upcoming masters this is a band to keep an eye on.

One For Adam; Hob And Nob