BY RUSSELL MOON
February 2, 2004
Sign in to view read count 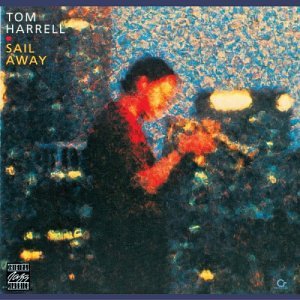 Recorded over two days in March of 1989, Sail Away is surely one of the youngest albums ever to be re-released as an OJC, and presumably the first from the CD era. Two songs from the sessions not on the original CD are included here, bringing the total time to a very generous 79 minutes. Although Tom Harrell composed every tune, the two days' sessions were not alike, and thus this disc has a "two LPs on one CD" quality.

The liner notes are ambiguous, but apparently the first day's session included Joe Lovanao on tenor sax, James Williams on piano, Ray Drummond on bass and Adam Nussbaum on drums. This group recorded five songs, all of which offer the sound of mid-sixties Blue Note. Lovano is in fine form. Harrell gives each member plenty of opportunity to solo. The perfect host, Harrell often solos after Lovano and Williams. This gives the music an ensemble rather than star turn effect.

"Eons" is an up-tempo number featuring a melody of jagged lines, while "Glass Mystery" is a light, smooth ballad. "Buffalo Wings" shows the influence of Wayne Shorter's writings. It features Lovano's best solo and a lengthy, swinging piano solo by Williams. "It Always Is" is a slightly up-tempo number reminiscent of a Lee Morgan date, and features a lengthy bass solo by Drummond. "April Mist" is a breezy tune featuring Harrell's best solo.

The rhythm section returned the second day, with Dave Liebman on soprano sax and John Abercrombie on guitar and guitar synthesizer. The Blue Note sound is put aside to make way for a contemporary sound very influenced by Pat Metheny. As most listeners are accustomed to that electric context, Harrell's rich and beautiful trumpet solos on first hearing sound out of place. But you soon become acclimated to the contrast in styles.

"Visions of Gaudi" recalls the bossa nova, with a little heavier touch; Williams here too provides a nice piano solo. "Dream in June" is very much of its time, strikingly resembling a Metheny composition. "Hope St." sounds like something from early '70s Passport, Klaus Doldinger's group.

Liebman sits out the remaining two songs. The absence of the soprano sax results in a much more mellow, less electric sound. The title track "Sail Away" is simple, straightforward and beautiful. For the final track, bass and drums sit out, and the remaining three are joined by Cheryl Pyle on flute. "Dancing Trees" is ethereal and relaxing, much like an ECM recording from that era.

There is not a weak track on this CD. The first day's session alone justifies checking it out. With Sail Away we have an early contender for Reissue of the Year.